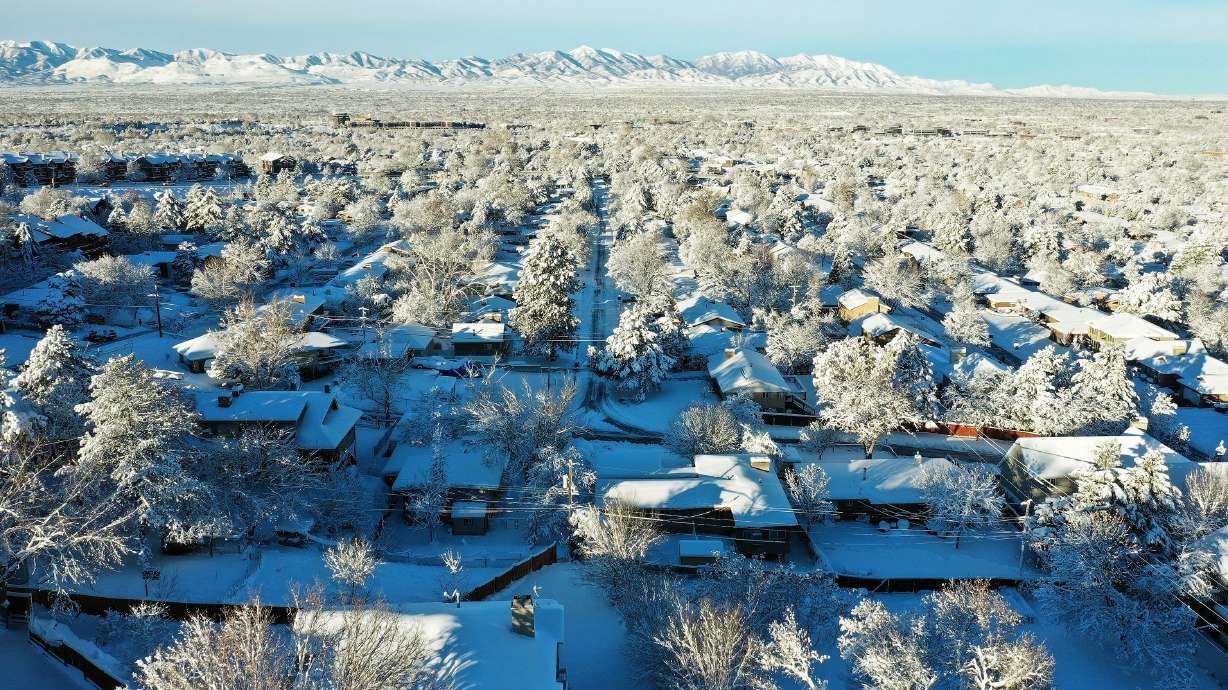 Several inches of fresh snow blanketed the Salt Lake Valley on December 15, 2021. A storm affecting Utah mostly on Tuesday and Wednesday is expected to provide a few more inches in the county, along with several more in northern Utah and up. 2 feet in the mountains. (Jeffrey D. Allred, Deseret News)

The national meteorological service published winter weather advisory Tuesday, which cover the mountainous areas of northern Utah, where up to 2 extra feet of snow is expected through Thursday. Several inches of snow are also expected in the backcountry communities of Cache Valley and Wasatch, while the Wasatch front is also expected to receive snow.

The return of the snow

The storm system is heading west but does not cover the entire state as some storms in December did. Meteorological service hydrologists told KSL.com last week that a new system over the Pacific Ocean was emerging, changing patterns of storms entering the west.

KSL meteorologist Kristen Van Dyke said parts of northern Utah are expected to receive snow showers on Tuesday. The storm is expected to plunge into Salt Lake County in the evening, she said.

â€œAnother system comes in (Wednesday) and may bring more snow accumulated during the morning hours (Wednesday) continuing into the afternoon and maybe even (Wednesday) at night,â€ she said. â€œFor the Wasatch front, we might look at a mix of rain and snow. And then Thursday we’ll see things calm down a bit, once we’re done Thursday morning.â€

Most of the snow is expected in the mountains for the duration of the storm system. Weather advisories call for 1 to 2 feet of snow in the Wasatch and Western Uinta mountains. This includes Alta, Brighton, Logan Summit, Mantua and the Mirror Lake Highway.

The warning for these zones went into effect early Tuesday and will remain in effect until 5 a.m. Thursday.

Winter driving conditions can be expected, including snow-covered roads and significantly reduced visibility, “the weather service wrote in the alert.” Areas of blowing snow can sometimes reduce visibility to near zero.

Forecast storms end with a productive December for these high elevation areas. For example, the Alta weather service station collected over 8 1/2 feet of fresh snow last month. Wasatch Mountain’s snowpack fell from about a third of normal in early December to a range of 107% to 117% of normal on Tuesday.

Meanwhile, an advisory in the Cache Valley and Wasatch backcountry, such as Garden City, Heber City, Huntsville, Logan, Park City, Smithfield and Woodruff, says 4 to 8 inches of snow through Thursday morning, with higher averages closer to Huntsville and the Ogden Valley.

The national meteorological service also tweeted a snow model on Tuesday morningg showing that Logan could end up with up to 1 foot of snow by Thursday, while Park City could also receive more than 1 foot of snow. Winter driving conditions, including snow-covered roads and poor visibility, are sometimes expected Tuesday and Wednesday in northern Utah, according to the weather service.

The agency’s model lists 1-8 inches of snow from Brigham City to Provo through Thursday, with the highest totals expected in and around Ogden, Davis County and Provo. Snow is expected in parts of central Utah, but most of the snow is concentrated in the northern part of the state.

A series of storm systems will bring spells of rain and snow to northern Utah and southwestern Wyoming through Thursday. The snow could have significant impacts on the Wednesday morning trip. Here is our latest snow forecast. #utwx#wywxpic.twitter.com/2Sn3hTa685

the Utah Department of Transportation issued road weather alert for most parts of the state from the northern Parleys summit on Tuesday. The agency urges drivers to slow down and use caution, especially on high-altitude roads.

Another alert is expected to be issued on Wednesday.

Wind is another component of the forecast for the next few days. The weather service has issued strong wind warnings and watches for parts of southwestern Wyoming, including Flaming Gorge; however, strong gusts are also expected in parts of Utah.

Gusts of up to 45 mph and more are expected in northeast Utah, including Randolph. Wind gusts are also expected to exceed 30 mph in areas like Park City and Duchesne between Tuesday morning and Wednesday evening.

Van Dyke said there would be strong gusts along the Wasatch front, but far from possibilities in northeast Utah and southwest Wyoming.

“We will see gusts of wind along the Wasatch front, but areas (northeast of Utah) could see gusts above 55 and 60 mph while (the Wasatch front) stays more in the 25 range. at 30 mph most of the day, “she said.

A full seven-day forecast for parts of Utah is available from the KSL Weather Center.