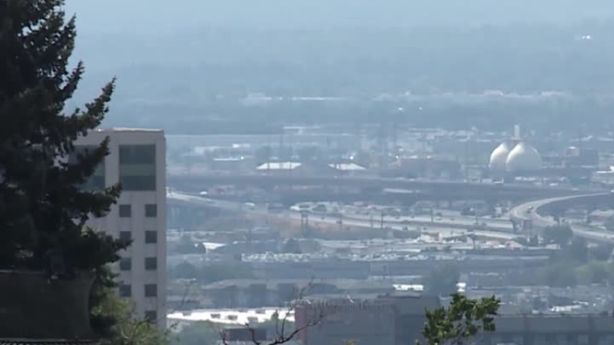 As part of Utah’s 5th Annual Climate Week, panelists met after the premiere of a local documentary to discuss air pollution on Tuesday. (Mark Wetzel, KSL)

SALT LAKE CITY – Utah Senator Derek Kitchen raised “red flags” regarding the future of the state’s air quality during a panel following the premiere of a local documentary centered on air pollution in Utah.

The film “AWiRE: What’s Beneath the Clouds” premiered to an audience on Tuesday, with a panel of speakers to answer questions. While discussing the hope each panelist had for Utah’s climate solutions, Kitchen, who represents Salt Lake City, began by citing his growing concerns.

The Democratic state senator pointed out that recent U.S. census data shows Utah to be the fastest growing state in the country. The state has ranked among the best in its economy, GDP growth, and business opportunities over the years, leading to what Kitchen called “explosive growth on the Wasatch front.”

While this growth bodes well for the state’s opportunities, Kitchen expects it to put “tremendous pressure” on Utah’s air quality and infrastructure.

Part of that progressive policy, Kitchen said, is in the way zoning and town planning is done.

A sentiment supported by Daniel Mendoza, professor at the University of Utah, who conducts research in metropolitan urban planning and atmospheric sciences. While many climate activists point to industrial air pollution as the main contributor, Mendoza said industries only make up about 15%, cars 50% and the construction sector 30%.

Whether it is consumer choices, legislative changes or government regulations that have the greatest influence on air pollution, the panel emphasized collective responsibility.

“It’s very hard for me to hear people say ‘someone else should fix this’ when I see them idling, trying to cheat their car inspections and wanting to get five packages now,” he said. added Mendoza.

But despite the shared responsibility of the community, the harmful effects of air pollution are disproportionate in this community.

The Healthy Environment Alliance of Utah, or HEAL Utah, found that communities living on the west side of the valley, where highways and the majority of industrial sources are located, tend to be more exposed to pollution than communities on the east side. .

The disproportionate effects were explored in the film through local Utahn stories.

“We started to delve deeper into this problem and we realized how systemic and endemic this problem is and how disparate this problem is in the communities of Salt Lake, and it really broadened its scope,” said the director Jack Hessler.

“No one should be subjected to pollution or damage just because of where they live, the color of their skin or who they are. You have to learn to grow as a community as opposed to the capitalist view of growth: get your money and get your big house and get away from pollution instead of “let’s get rid of the pollution that harms and affects our communities”, he said. said Carmen Valdez, political associate for HEAL Utah.

The film’s premiere was part of the fifth annual Utah Climate Week, hosted by the Utah Climate Action Network. The annual series of events features a group of organizations, businesses, leaders and residents on the impact of climate change on Utah and solutions. The film “What’s Beneath the Clouds” is open to the public from Wednesday and can be viewed online.

How a federal government shutdown would affect Utah