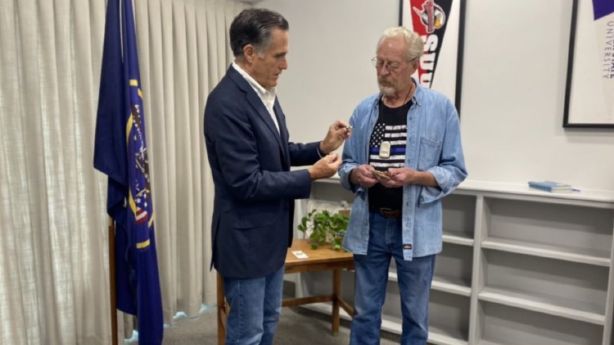 SALT LAKE CITY – Richard DeGooyer said when he returned home from serving in the US Army in the Vietnam War, he was told not to wear his uniform, only Levi’s.

He wore jeans again on Friday, but was able to joke with Utah Senator Mitt Romney as they met in the downtown federal building. â€œWe both wear Levi’s,â€ they laughed.

DeGooyer and his family reached out to Romney’s office recently, hoping for help securing replacement medals for those he lost 20 years ago.

“. , and the marksman badge and rifle bar.

Richard DeGooyer has won numerous medals in Vietnam for his service. He was also a good marksman in the army. “I still am,” he said. @ SenatorRomney when the senator presented him with his replacement medals. pic.twitter.com/wibcGT4nsJ

“Very honored, very honored to meet the senator, and it is an honor for all veterans,” DeGooyer told KSL afterwards. He said he was grateful for the help and recognition he had received from the government and VA as well.

Romney said it was his privilege to make the presentation.

“I’m glad we were able to secure replacement medals for him to recognize his service to our country,” Romney said. “People like me have a special place in our hearts for those who served in Vietnam. They did not get the respect they deserved.”

Romney had spent the morning meeting recent high school graduates from Utah en route to various service academies in various branches of the military. They also stayed in the room to watch the presentation and applaud DeGooyer.

Each year, I have the honor to nominate some of Utah’s best and brightest students in the various service academies across our country. This morning I was able to meet some of these students and wish them well before they left to serve. I know they will represent our state well! pic.twitter.com/bZbbDzXmW8

The 74-year-old vet said he was grateful to see the young people who would be the next generation to serve the country.