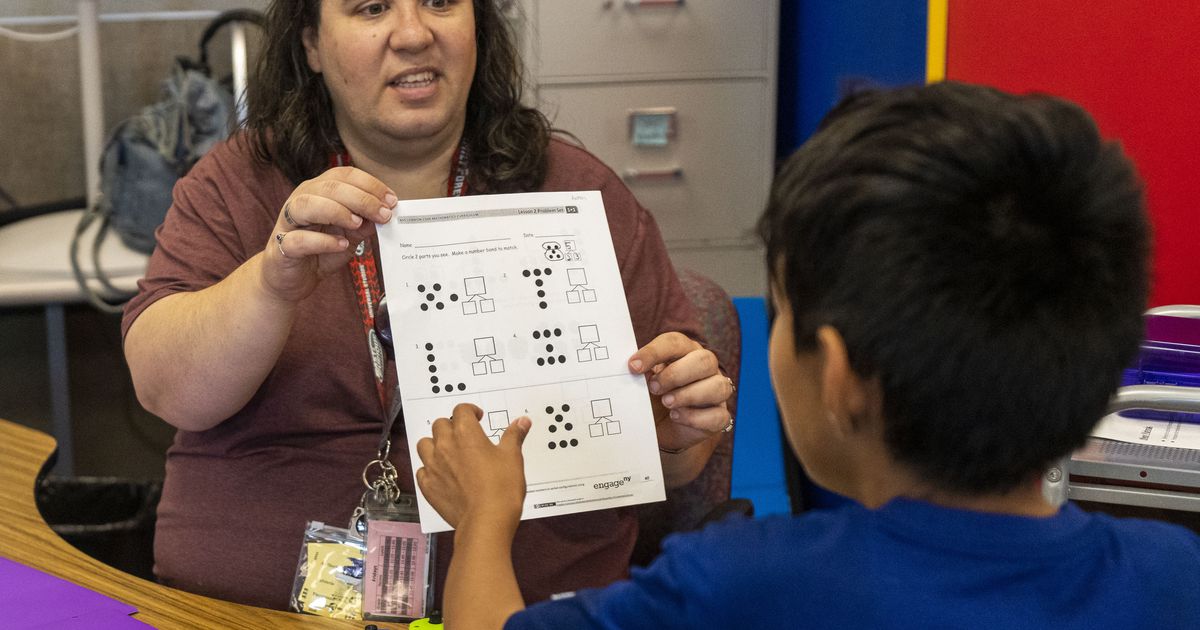 Carolin Quist starts every day in her Parkview Elementary classroom for special education students with movement.

Her fifth grade students mimic a dance routine shown on a screen, while Quist and two educational assistants – Bonnie Welch and Jenniffer Wardell – exaggerate their moves, making all seven children smile and laugh.

Later, the class divides into groups. Two boys work on a math spreadsheet with Wardell. Quist sits down with a girl for a matching activity. Other children practice reading with Welch.

Having all three staff members in the Salt Lake City classroom, working together, allows them to provide students with the special education that works best for them individually.

Quist feels lucky, she says, to have such capable and dedicated assistants. Most schools in the Salt Lake City School District cannot convince applicants for positions in special education classes to interview for the position, let alone hire them.

There are 40 special education assistant positions, in total, that have not been filled in the district, spokesperson Yándary Chatwin said. The Granite, Canyons and Murray school districts are also reporting that special education paraeducator positions have been particularly difficult to hire for this school year, during a nationwide labor shortage.

Paraeducators, who generally must have a high school diploma or equivalent and pass a background check, assist students under the supervision of a teacher. Retaining them has been a challenge for years in many Utah districts, said Nicole Suchey, vice-principal at Emerson Elementary.

But the main driver of the current shortage in Salt Lake City is that employees who left because of the COVID-19 pandemic never returned, said Suchey, who previously worked as the district’s coordinator for special education.

The district has given teachers raises to combat turnover, Suchey said, but hiring paraeducators has found it difficult to compete with entry-level positions in other industries. A paraeducator, for example, often earns less than an Amazon delivery driver.

“It’s tough when you’re not getting benefits,” Suchey said. “And I think people during COVID probably wanted more, but it’s incredibly expensive.”

To help attract more people to apply, the Salt Lake City School Board recently approved full-time hours for paraprofessionals, access to health benefits, and a $1-per-hour raise, at $18.50.

The plan will pay for 20 full-time paraeducator positions, though about 11 of those positions are technically already filled, said Logan Hall, the district’s director of human resources. The changes will cost the district about $50,000, said business administrator Alan Kearsley.

“Desperate need” around the valley

The Granite School District is looking for 170 paraeducators, plus 16 special education teachers, spokesperson Ben Horsley said. The district is considering changing its salary structures for paraprofessionals and teachers.

“People are just looking for where the grass could potentially be greener,” Horsley said. “…That’s why we’re re-evaluating.”

The Canyons School District has raised the starting salary for paraeducators to $15 or $16 an hour, depending on the candidate’s education level — but it still has about 25% of the employees it needs, Nate said. Edvalson, director of special education.

Canyons uses funds allocated to these open positions to retain current employees, through raises and stipends. Employees who refer a friend who works as a paraeducator for at least 90 days receive a $500 allowance.

Hiring paraeducators has been a struggle for the district for years, Edvalson said, even though the district has developed partnerships to encourage college psychology students to work for Canyons.

The Murray School District has a “desperate need” for paraeducators, especially in special education classrooms, spokesperson Doug Perry said. The district has about 15 open positions for helpers, which Perry says is double or triple the number of openings Murray has faced in years past.

Employee retention has been a challenge since the position is not full-time and does not offer benefits. “Working with the Legislative Assembly to increase funding would be a huge step,” Perry said.

The Jordan School District has hired 100 paraeducators since the start of the school year, but is still looking for more, spokesperson Sandy Riesgraf said. The district has extended hours for current assistants.

Move to fill the gaps

The Salt Lake City School District tried again to hire paraeducators after raising its salary in July. Randy Miller, the principal of Franklin Elementary School, snatched up the only qualified candidate who applied.

“Oh, did you get it?” their fellow administrators jealously exclaimed at their annual conference, Miller recalled.

Franklin is a “central school” in the district, which means children who need extra help are bussed to the west side – about 40 in all. The school also provides resources to about 23 students who live in the neighborhood, Miller said.

Adding the fifteen children on a speech plan, just under a quarter of the school’s population of about 270 has an Individualized Education Plan, or IEP.

This means that the teachers switch roles. The one who spent all summer preparing to help second graders, for example, instead helps kids of all grades who need extra help and live within Franklin’s boundaries. The teacher who would normally assume this role, called the resource teacher, replaces the fourth year, where the teaching position is vacant.

In Quist’s class at Parkview, several candidates for paraeducational positions passed the interview process only to disappear when it was time to sign their contract. She tries to recruit cashiers when she goes to the grocery store, but none of them have applied to her school yet.

“The Most Incredible Moment”

Quist begins to plan the value of fourth and fifth graders each year long before fall arrives. She charts their IEP goals on a huge whiteboard at home.

Since fifth grade is the last year in elementary school for these students, she said, it’s important for them to maintain numerical values ​​and literacy skills before moving on to middle school.

Welch retired in 2009 after teaching sixth grade for 25 years; now a paraeducator, she often works with students who progress to studies in a traditional classroom. And Quist leans heavily on Wardell with math because she “helps kids who are stuck,” the teacher said.

Wardell, a freelance film critic, has another special skill. The student with the most points at the end of the day – for things like raising their hand or helping a friend – wins a two-part reward: a toy from the prize box and a sound effect from Wardell.

She turns her head, raises her arms and lets out a howl to demonstrate her most requested sound: the wolf. The children laugh.

Welch and Wardell say working as a paraeducator is as rewarding and flexible a job as they’ve ever had. But the salary is not enough for many.

“I wish I made enough money to be able to say, ‘I don’t have to worry about a second job,'” Wardell said. “…If I could earn enough to make a living as a para[educator]I would do it the rest of my life.

According to Welch and Wardell, the ultimate benefit of working is being with children. “There’s just something about their little minds,” Welch said.

Wardell likes to see the way a child’s eyes light up when a mathematical concept he’s stuck with comes together in his mind.

“It’s the most amazing moment,” Wardell said. “And I would put up with just about anything to have the opportunity to experience that.”

To be a paraeducator, applicants must have a high school diploma or its equivalent and pass a background check.

Candidates can apply to be paraeducators for the Salt Lake City School District and other districts on the district’s websites.