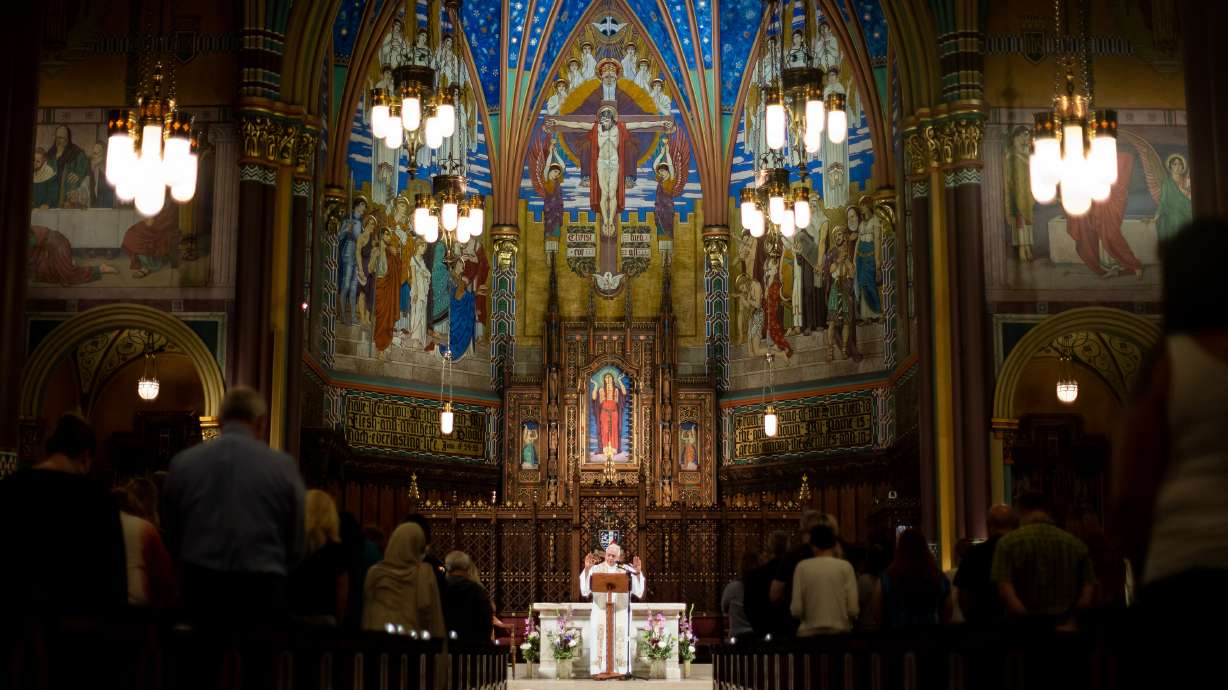 The Very Reverend Martin Diaz leads a service at the Madeleine Cathedral on August 17, 2021. On Friday, residents joined Catholics around the world in a prayer for peace and consecration for Russia and Ukraine. (Spenser Heaps, Deseret News)

SALT LAKE CITY — Catholics around the world, including at the Madeleine Cathedral in Utah, prayed together Friday for peace, especially peace in Russia and war-torn Ukraine.

Pope Francis has asked everyone to join in the prayer, named Act of Consecration to the Immaculate Heart of Mary for Russia and Ukraineas part of a service that began at 5 p.m. in Rome.

At the Cathedral of the Madeleine, the Most Reverend Martin Diaz led the prayer as part of a noon service, participating in the prayer a little later than that in Rome, which would have been given around 11:30 a.m. MDT.

The prayer said that humanity needed Mary’s motherly help now and asked her to protect the world from war.

“At this hour, a weary and bewildered humanity stands with you under the cross, needing to entrust itself to you and, through you, to consecrate itself to Christ. The peoples of Ukraine and Russia, who venerate you with great love, turn to you now, even as your heart beats with compassion for them and for all those peoples decimated by war, hunger, injustice and poverty”, he continues.

Throughout the prayer, Catholics said they had entrusted humanity, especially in Russia and Ukraine, to Mary, the mother of God, and asked for the war to end.

The consecration to #ImmaculateHeart of Mary is an act of full trust of children who, in the midst of tribulations, turn to their Mother, entrusting themselves to her, depositing in this pure and spotless Heart all that we have and are, so that she may protect and watch over us.

Friday was chosen for this prayer because, nine months before Christmas, it is the day when Catholics celebrate the Annunciation, the day when an angel visited Mary to announce that she would have a child, followed of Jesus’ design.

Reverend Diaz said the dedicatory prayer during a school mass. He talked to the students about being at peace with each other, not fighting with each other or bullying.

“In the same way that we are friends with Jesus, Mary wants us all to be friends. Not just here, but around the world,” he said.

Giving the same prayers is very familiar to Catholics, like giving the same Mass in many churches, but the concept of congregations around the world praying at the same time is unique, Reverend Diaz said.

Poll: Why Utahans say it’s time to treat COVID-19 like other illnesses