The fleeing train from the inner port must slow down 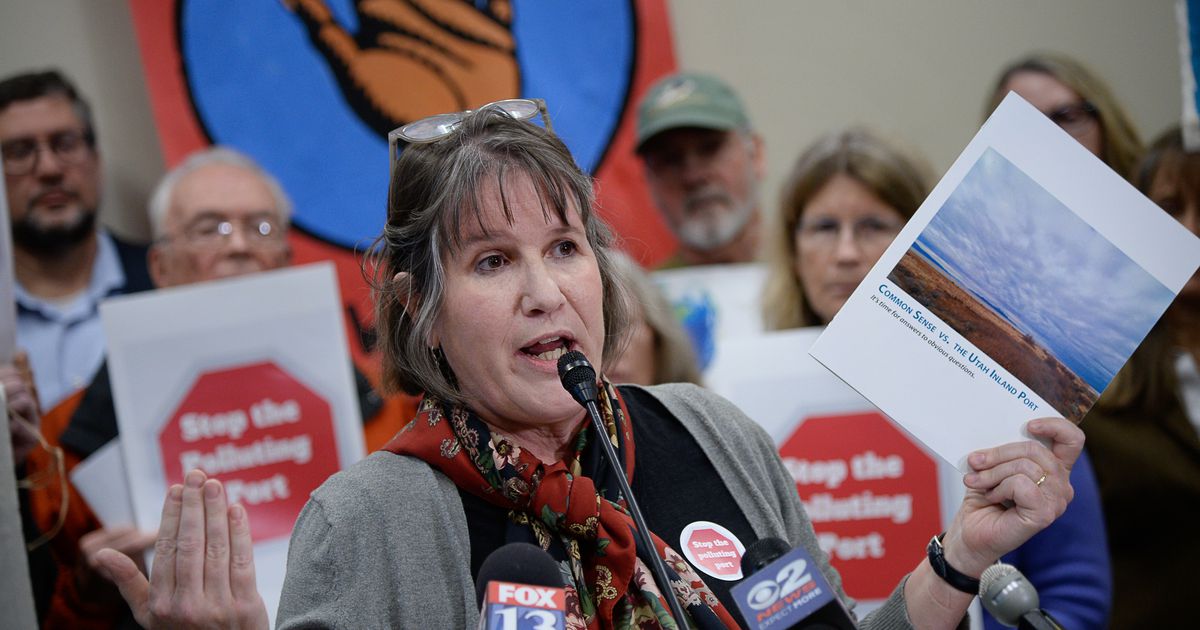 (Francisco Kjolseth | The Salt Lake Tribune) Deeda Seed of Stop the Polluting Port Coalition presents an in-release report outlining the potential environmental damage from the Utah Inner Harbor project at a press conference on the US Capitol Utah on Wednesday January 22, 2020.

Due to the combined efforts of committed community members and Salt Lake City officials, a vote to fund the development of a transshipment facility and other port infrastructure has been postponed. In previous weeks, the port authority had rushed to commit $ 255 million in debt, backed by property tax revenues, for purposes the port authority had not described in detail.

Without the Utah Legislature’s creation of the Utah Inner Port, these property tax revenues would have flowed into the Salt Lake City General Revenue Fund. The city will be responsible for providing a range of municipal services to the inner port area – such as water and sewer pipes, water treatment, road maintenance and public safety services – without the revenue stream typically used to fund these services. And, if the port authority does not have the revenue to pay off that debt, the responsibility could fall on Salt Lake City. All of this should be alarming for Salt Lake City taxpayers.

The director of the Port Authority said the delay was intended to bring back the “discussion on merit arguments”. We are waiting to hear what the â€œmeritsâ€ are, but we will not hold our breath.

Summary information available to the public of the plans for the transshipment facility shows its intended location adjacent to the existing Union Pacific intermodal facility on the west side of Salt Lake City. Its goal is to process thousands of shipping containers from California ports. They will arrive in Salt Lake City on trains to be unloaded into trucks. The transshipment facility will also support the development of new warehouses.

We don’t know anything about the health consequences of all these trucks, trains and warehouses, the expected volume of traffic, and the structure and design of this facility.

We know that the ports of Long Beach and Oakland, whose air quality is drastically degraded by truck traffic, are understandably excited to dump this pollution elsewhere. But bringing this pollution into the Salt Lake valley, which has already dramatically altered air quality, doesn’t make sense. And asking taxpayers to pay for it is outrageous.

The beneficiaries of this program are the usual suspects – business interests such as Rio Tinto, Union Pacific and warehouse developers. In the port authority’s strategic business plan, the promoters cited additional rail and transshipment facilities as the keys to their profitable development.

The bottom line is that Utah taxpayers are paying for a transshipment facility that will increase pollution so that a few already wealthy corporate interests can rake in bigger profits.

To make matters worse, the port authority has created an artificial emergency, when it really should put the whole thing on a long hiatus until it can produce detailed plans outlining what it intends to do. build, exactly how much it will cost, and the human health impacts of the development.

This break should also include awaiting the outcome of the litigation filed by Salt Lake City over whether the creation of the Port Authority by the Utah Legislature was legal under the Utah Constitution. . This spring, the Utah Supreme Court heard oral arguments in the case, and a decision may be released soon.

For those who haven’t followed the Inner Harbor saga closely, it is important to note that supporters of the port like to pretend that this is a “done deal”, to appease the opposition and create a feeling of inevitability, when the truth, which spread during the last legislative session, is not really so. For example, as several port leaders have told lawmakers, â€œthis is not an inland port without a transshipment facilityâ€.

So it’s far from a done deal, and the affected public and elected officials still have an important role to play in what’s going on with development in the northwest quadrant of Salt Lake City.

We must continue to hold the port authority to account and urge our local and state elected officials to help us end the damage caused by this costly and damaging mess.

COVID-19 vaccines for children: what parents need to know