The county will receive an injection of federal funds 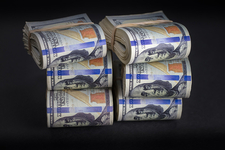 Officials announced an imminent infusion of windfall federal funds — to the tune of nearly $8 million over two years — directly into the county’s general fund, with no strings attached on how the money should be spent.

“I’m thrilled to report a big boost to the economy of Millard County as a whole with funds coming into the general fund that we hadn’t anticipated,” he said in a statement. announcing the news.

He credited the efforts of Democratic Oregon Senator Ron Wyden, who in 2021 requested an additional $2 billion in COVID relief spending under the American Rescue Plan Act (ARPA) to benefit only rural forest communities. and Native American tribes. Counties with large tracts of public land that receive payments in lieu of taxes from the federal government have been specifically targeted with $1.5 billion in new spending. Tribal governments will have access to an additional $500 million in new spending under a new “economic stabilization” vehicle.

Draper read the letter while making the announcement.

“Based on the information you provided to me, Millard County should be eligible for nearly $4 million in Sec. 605 funds (605 is the section of ARPA authorizing the expenditures) that the Oregon Senator , Ron Wyden, offered as part of the original Covid relief bill in 2021. As you know, I worked with Wyden and the Treasury Department on this for over a year on behalf of the National Forest Counties and Schools Coalition, of which Millard County is a member.

Draper said Millard County is expected to receive more funding from the program than any other county in Utah except San Juan. He said the county’s allocation was based on the amount of public land within its borders as well as the economic status of its population.

“The factor that brought us here was not just our LTIP payments, but our economic situation. There are three or four counties that will get about $3 million a year, but we’re double what most counties and sometimes four or five times more on that allocation that’s given to us. It’s a real bargain,” he said.

Draper said Millard County’s allocation will be $3,949,200 for the 2022 budget year and the same amount again in the 2023 budget year. next year from November.

Draper said there is only one specific restriction on the funds, which is that they cannot be spent to lobby Congress.

Sheri Dearden, the county treasurer, said the original legislation was still intended only for public land counties. And it stayed that way — a rarity in Washington these days — through the whole process, she said. Dearden Confirmed Recipients have broad discretion over how the funds are used, similar to how other general funds are used. She said new spending can include anything from maintaining or expanding public services, investing in infrastructure or facilitating economic development, improving health outcomes or transitioning communities to clean energy, increasing the size of the government workforce or improving service delivery, for example through investments in technology infrastructure and the like, she says.

Draper made some suggestions regarding budget allocations for one-time funds. He said one idea is to use the funds to better manage the sheriff’s fleet of vehicles by leasing all new equipment rather than buying and maintaining vehicles on a piecemeal basis, as is mostly done today. today.

“I think that would drive down costs in the years to come,” Draper said.

Draper also said the landfill needed a big piece of machinery, a compactor, which costs up to $1.2 million – landfill workers were praised at a recent meeting by commissioners for maintaining diligently equipment that had long outlived its life expectancy.

Draper said some of the funds could be earmarked for signing bonuses to attract new deputies — Sheriff Richard Jacobson says there are currently about seven to nine vacancies among sworn and unsworn positions within the sheriff’s office.

A county budget workshop meeting is scheduled for this week where these unexpected funds will no doubt be on everyone’s mind.

Sheriff Jacobson said he was pleasantly surprised by the news.

“I think if used wisely, it can make a huge difference to the sheriff’s office, in terms of compensation, recruitment and retention, and equipment needs,” he said. .

County officials have warned for years about the impact on public finances from the writedown of Intermountain Power’s assets – Intermountain Power is the county’s largest taxpayer. The depreciation combined with an inordinate number of tax protests from centrally assessed businesses inside the county has created a perfect tax storm for taxpayers, who have seen property taxes rise precipitously in recent years to make up for fiscal holes left by the decline in revenues generated by the industry. , especially PPI.

The next two years, in fact, were to see a further tightening of public finances with the replacement of the Intermountain coal-fired power plant with a new natural gas and hydrogen plant. All county spending not mandated by state law — think recreational facilities and services — is expected to see significant cuts in the near future, officials have previously warned.

It’s not until new taxes are levied on new Intermountain assets that taxpayers and the county budget should see significant relief, officials also said.

That equation changes dramatically, however, with $8 million in windfall federal funds available to spend.

“He came at the right time during our budgeting process to reflect that,” Draper said.

Commissioner Evelyn Warnick said she was thrilled to see how the funds will help the county.

Draper and Warnick both lost primary elections to retain their seats after Jan. 1. Warnick lost to Vicki Lyman and Draper was beaten by Trevor Johnson in his Republican contest.

Lyman does not have a challenger in November. Johnson faces another political neophyte in Fillmore’s Johny Munoz, who is running on the United Utah ticket.

The new commissioners were previously expected to inherit several complex budget headaches, including an ongoing series of tax disputes with Intermountain Power, which is notable since both Lyman and Johnson are employees of the power producer. .

However, the new commissioners now find themselves in a position to enjoy a much softer landing when they take office next year.

Draper said he previously knew the county was in line to receive funding from Wyden’s effort — the commissioner sits on the National Association of Counties’ public lands steering committee, which backed the spending proposal. Wyden – but he had no idea how many.

He said that working with his two commission colleagues, he believes the county will now achieve two or three years of continued financial stability from the funding.