“Stop the attacks”: Tribal leaders and activists call for an end to “political football” on Utah landmarks 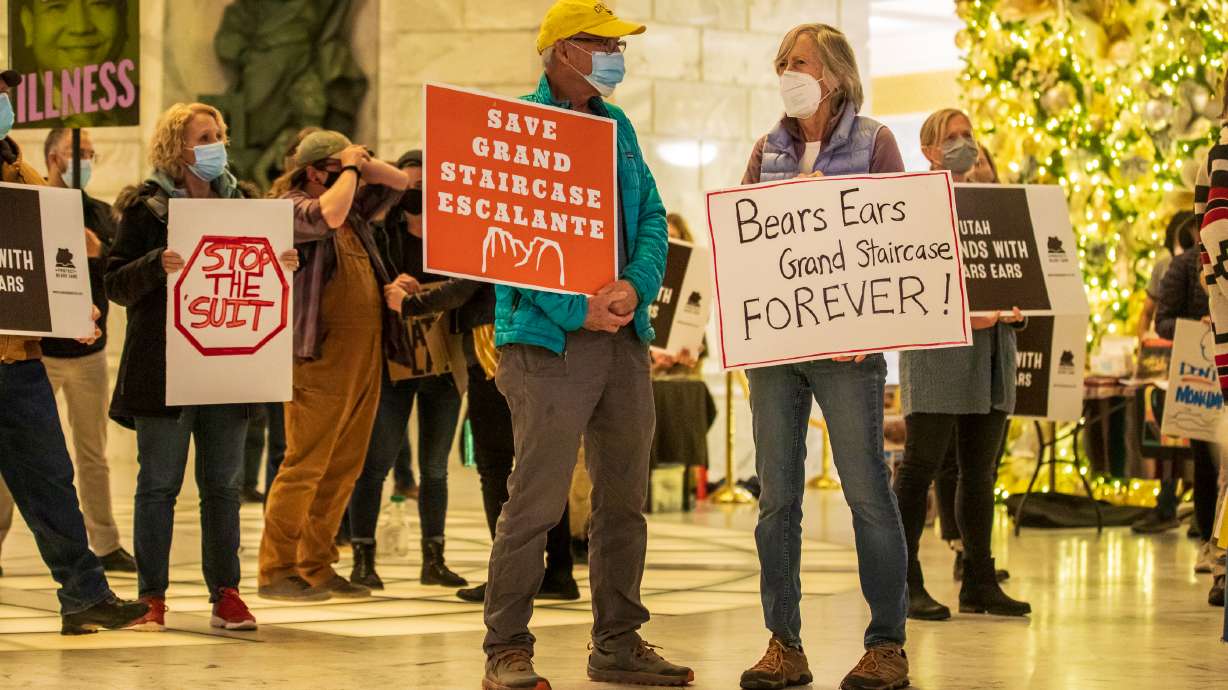 Supporters of the recent restoration of the Bears Ears and Grand Staircase-Escalante national monuments attend a rally at the Utah Capitol on Thursday. The group wants Utah not to challenge President Joe Biden’s recent decision to restore monuments to their original size in court. (Carter Williams, KSL.com)

SALT LAKE CITY – Standing by the steps inside the Utah Capitol was like dÃ©jÃ  vu for Olivia Juarez on Thursday night.

Juarez, the Latino community organizer for the Southern Utah Wilderness Alliance, was quick to point out that it was on this day four years ago that she and more than 6,000 others stood outside the building. to protest ahead of a presidential proclamation that ended up dramatically reducing the size of the Bears Ears and Grand Staircase-Escalante National Monuments.

â€œYou’ll hear me reuse the word more times than I would like because we’ve been here before,â€ she said, looking at a group of just over 100 activists and Native Americans on Capitol Hill. “We have been in the Capitol, on the streets over and over again.”

But Thursday’s rally was completely different from that of 2017 as the dimensions of both monuments were restored almost two months ago. This time around, the focus has been on Governor Spencer Cox and Attorney General Sean Reyes, as the state is signaling it will likely challenge the ruling in court.

Those who attended the rally on Thursday came to express their displeasure with the tactics. Tribal leaders and activists argue that challenging the court’s ruling will end up costing taxpayers millions of dollars and likely come to naught, based on past court cases.

President Joe Biden restored the size of the Bears Ears and Grand Staircase-Escalante National Monuments through a pair of proclamations issued on October 8. . “

But the debate over the two monuments has been far from easy in recent decades. Presidents Bill Clinton and Barack Obama, both Democrats, created the Grand Staircase-Escalante National Monument (1996) and Bears Ears National Monument (2016), respectively. Together they have an area of â€‹â€‹approximately 3.25 million acres.

President Donald Trump, a Republican, signed a proclamation in 2017 that divided the monuments into five smaller zones with a total size of just over a third of the original boundaries. A review of the decision four years ago was one of the first things Biden, also a Democrat, ordered when he took office in January.

Most of Thursday’s rally focused on what might happen next in the process. Cox, Reyes, Lt. Gov. Deidre Henderson and senior members of the Republican-led Utah legislature all lambasted Biden’s decision in October.

“President Biden’s decision to expand the monuments is disappointing, but not surprising,” the group said in a combined statement, as news of the president’s decision emerged. â€œOver the past 10 months, we have consistently offered to work with the Biden administration on a permanent legislative solution, which would end the ever-expanding and shrinking of these monuments and bring certainty to their management. has been to perpetuate progress in the management of our public lands for the benefit of all those who use them, in particular those who live on and near these lands. â€

At the time, they involved possible legal action. Then on October 22, just weeks after Biden signed the proclamation, Reyes began the process for law firms to assist the state of Utah in a possible dispute over the legality of Biden’s proclamations. . The state has yet to file a legal challenge in federal courts.

Juarez said the fees and expenses for a legal fight could easily reach $ 10 million. Brooke Larsen, a grassroots activist who spoke at the event, was quick to point out that many states, including Utah, have already failed in their attempts to overturn a proclamation made under the Laws on antiques.

The Bears Ears region is not a series of isolated objects but the entire landscape itself.

Hopi Tribe President Timothy Nuvangyaoma, Ute Mountain Tribe Council Member and Bears Ears Inter-Tribal Coalition Co-Chair Malcolm Lehi, and Utah Dine Bikeyah Board Chair Davis Filfred , all traveled to the Utah Capitol to represent some of the Native American tribes who supported the original designations of the monuments and then the restoration of the monuments.

â€œIt’s not a political football game, going back and forth,â€ Nuvangyaoma said. “Governor Cox, political leaders around you, stop. Stop the attacks.”

Filfred feels the same. As the representative of the Navajo Nation, he said he never really got to meet former Governor Gary Herbert. He added that he had heard Cox say that there should be an end to the “ping-pong” battle, but he feared a legal battle would do just that.

“That’s exactly what we’re doing, and I’ve come here to say stop,” Filfred said, as the crowd in front of him cheered him on.

Tribal leaders said Thursday that money used in a court could easily be used to help residents near monuments or anywhere else in Utah. Filfred, for example, looked at a large Christmas tree inside the Capitol and said there were many Navajo Nation residents who would like to light a Christmas tree but they don’t have electricity. Some, he added, don’t even have flush toilets.

“All this money could be put to good use,” he continued. “I tell them what we need to do is help others.”

Executives added that there are currently bigger issues with the monuments, which they say are in desperate need of a new management plan to accommodate the growing popularity of the area.

The land at Bears Ears is considered sacred and a homeland for the Ute, Hopi, Navajo, and Zuni tribes, Lehi said. He said their ancestors lived, hunted and gathered, prayed and participated in rituals there, among other activities, for centuries. These are all traditions that continue to this day.

Referring to the 2017 proclamation that reduced Bears Ears by 85% with two protected areas, Lehi said the land should be conserved as a whole as it was originally designated because the land is a representation of the people.

â€œThe Bears Ears region is not a series of isolated objects but the landscape itself. It is the object itself that deserves tribal and federal protection,â€ he said. “Bears Ears is a living connected landscape where people (are) inside, not a collection of objects – it needs to be protected.”

This is in addition to concerns about drilling and mining at both monuments, Indigenous leaders and Larsen said they were concerned.

A final argument made by attendees on Thursday is that they say most Utahns don’t want monuments to be altered again. A Colorado College study of public lands in the West released earlier this year found that nearly three-quarters of Utah voters surveyed supported restoring national monument protections.

But if the state takes legal action, it’s likely that crowds will return to the Utah Capitol to support the Bears Ears and Grand Staircase-Escalante National Monuments.