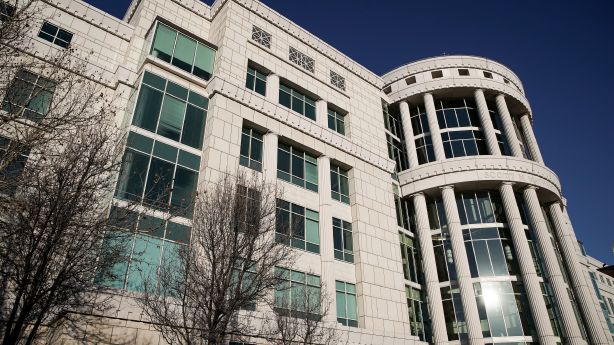 The Matheson Courthouse in Salt Lake City. A Salt Lake businessman who owns two carpet companies was charged Monday with seven felonies accusing him of sexually assaulting a 16-year-old woman and girl after meeting them on a Sugar Daddy dating site. (Spenser Heaps, Deseret News)

SALT LAKE CITY – A longtime Salt Lake businessman faces criminal charges accusing him of sexually assaulting two people, including a teenage girl, whom he met on a Sugar Daddy website.

Raffi J. Daghlian, 77, until recently continued to be active on the website and there could potentially be other victims, investigators said while uploading documents to the 3rd District Court.

Daghlian was charged Monday by the Utah attorney general‘s office with rape, human trafficking and aggravated exploitation of child prostitution, all first degree felonies. He was also charged with three counts of forced sexual abuse, a second degree felony and trafficking in material injurious to a minor, a third degree felony.

Daghlian is the owner of Daghlian Rugs on Main and Daghlian Oriental Rugs and has also been involved in the restaurant industry in Salt Lake City.

He is accused of sexually abusing two people, a woman and a girl who was 16 at the time. Daghlian met the two victims on the Seeking Arrangements dating site, the attorney general’s office confirmed. The website promotes itself as a place “where beautiful, successful people nurture mutually beneficial relationships.”

“The purpose of the dating site was to match men who were willing to pay women money or spend money on women in exchange for dating,” the indictment documents say.

In July 2020, a 16-year-old girl told police she registered on the website and claimed she was 18. She began speaking with Daghlian and the two arranged to have a date “with the understanding that the accused would pay (her) a sum of money to go to dinner with him”, according to the charges.

At dinner, Daghlian made sexual advances to the girl, who responded by telling her “that she was not there to have sex, but rather to get money to pay her rent.” for having dinner with (Daghlian) â€, according to the charges.

After dinner, Daghlian took the girl to a carpet store he owned at 2364 S. Main. At the store, he forced her to undress and engage in sexual acts, according to the charges. The teenager said Daghlian would get “angry” if she didn’t comply, so she did as he asked because she was “afraid of what (Daghlian) would do.”

Another woman told investigators that she met Daghlian on the same dating site in 2013. During their date, Daghlian “repeatedly tried to get (the woman) to drink alcohol. and made several references to sex and sexual relations, “according to the charges.

He took the woman to his carpet store at 1053 E. 2100 South and insisted she have another drink, then raped the woman inside the business, the prosecution documents show.

The woman immediately reported the assault to law enforcement in 2013. A DNA sample of her alleged attacker was taken from her dress. But according to court documents, “Daghlian’s DNA profile was never obtained or compared to the profile on the dress, and the investigation was never presented to a prosecution for screening criminal charges.”

After learning that charges had never been laid and that the case had never even been considered for potential charges in 2013, investigators from the attorney general’s office obtained a DNA sample from Daghlian’s son.

“By comparing the obtained male DNA believed to be (Daghlian’s) son to the DNA on the dress, it is indicated a 99.9999% probability that the DNA on the dress is from a person. having a family relationship with the son (ie the accused), â€investigators wrote in the charges.

An arrest warrant without bail was issued against Daghlian on Monday. Prosecutors say they will obtain a DNA sample from him when he is taken into custody and compare it with the DNA profile taken from the robe.

In each incident, Daghlian “is accused of using a social media dating site designed to match men who were willing to pay women money or spend money on women in return. dating, to lure women into his carpet business for sexual activity. When these women did not consent, he sexually assaulted them to satisfy his sexual desires, “the prosecution documents say.

“Two alleged independent victims reporting very similar sexual assaults suggest that the likelihood of a certain event occurring, such as wrongdoing in error or accusations against an innocent person, is unlikely,” the investigators wrote.

The attorney general’s office also noted in court documents that it was continuing “to investigate other allegations of sexual assault by the accused committed in a similar manner.” Prosecutors say Daghlian continues to be active on the dating site and “over a 90-day period in the fall of 2020, exchanged more than 6,000 messages.”