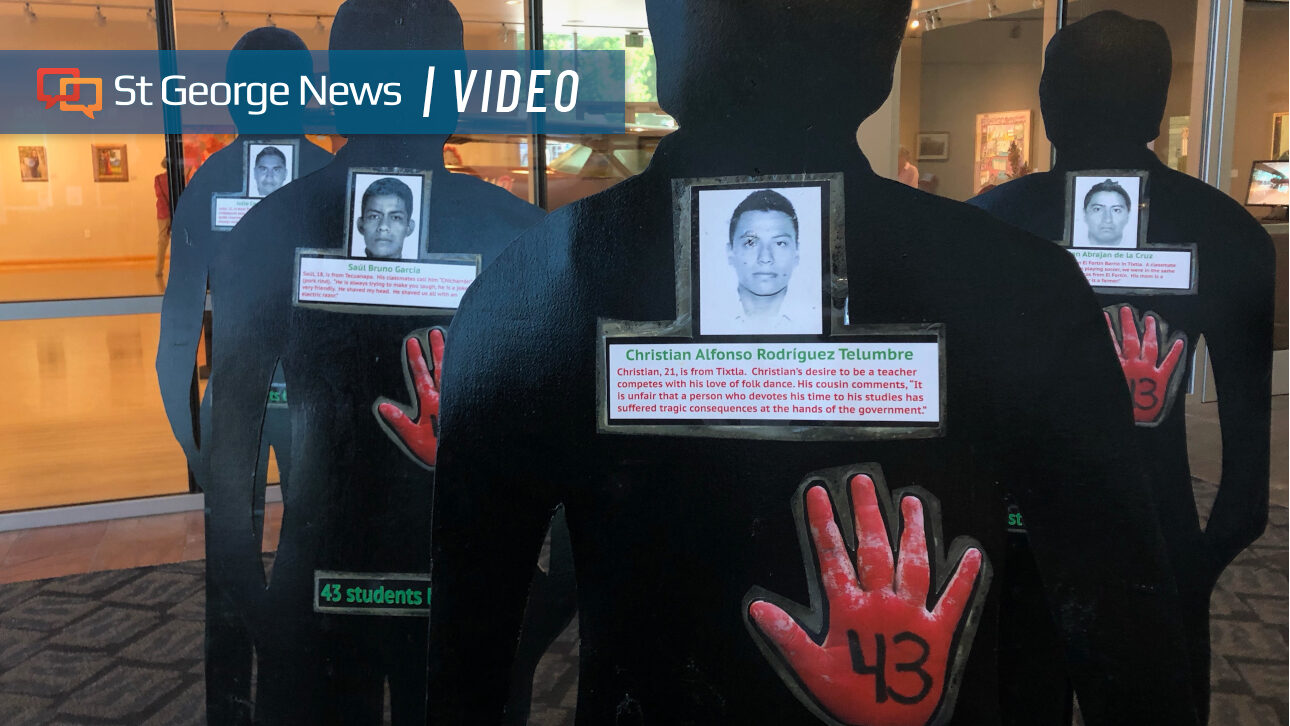 ST. GEORGE – To mark the seventh anniversary of the disappearance of 43 students who went missing after visiting Iguala, a city in the state of Guererro in Mexico, Steve Lee, the dean of the College of Humanities and Social Sciences at Dixie State University is producing a series events at the university.

The students, who attended Raul Isidro Burgos Teachers’ College, traveled to Igaula on September 26, 2014 to secure buses to Mexico City.

Instead, after attending a political rally in the town square, they were reportedly forced into police trucks and were never seen again.

Seven years later, the students have joined tens of thousands of other Mexican citizens who have gone missing and whose whereabouts are unknown.

Filmmaker Lee came up with the idea of â€‹â€‹producing an art installation that will be staged in nine campus buildings.

The idea for the installation, which features 43 characters with photos and biographies of each missing student, came while Lee was at the University of Santa Clara, California. But his connection to the material, he said, took root long ago.

â€œI grew up in El Paso, Texas,â€ Lee told St. George News. â€œI worked in a demolition site located 200 feet from the border. I could see the cardboard barracks across the border. This made very clear the boundaries between the haves and have-nots. “

As Lee recounts, one of his colleagues was a Mexican. One day, Lee asked the man, who spoke little English, where he was from.

â€œAnd he pointed the finger at the cabins,â€ Lee said. â€œAt that point, I decided to try to find a way to use education to avoid poverty. “

While the reasons for the rallies in Iguala and Salt Lake City may not be comparable, Lee said the results should be carefully considered.

â€œOur students were allowed to speak out without fear of death or imprisonment,â€ he said. “Whereas those students who disappeared seven years ago weren’t.”

Lee and others are trying to draw attention to what happens when elected officials become corrupt and citizens remain silent. His team includes Mexico City-based journalist John Gibler, who has covered extensively on the missing students.

Silence, Lee said, can become a form of acceptance when violence is used as a political tactic.

â€œAnd that is why we cannot allow leaders, wherever they are, to act with impunity,â€ he said. â€œThrough this series of events, I try to get students to see with their heads and their hearts. They may be American, but we still have to speak up when injustices occur. “

Mexico City-based journalist John Gibler has been reporting from Mexico since 2006. He focuses on issues of social movements and political violence. Previously, he had worked as a human rights volunteer in the state of Guerrero since 2000.

On October 3, 2014, Gibler took a bus to Chilpancingo, Guerrero and went to school the next day.

â€œDue to the confusion in the press and conflicting official statements about the events, I decided to focus my reporting on interviews with survivors and witnesses,â€ Gibler said.

Since then, he has published numerous articles, like this one, as well as an oral history for City Lights editions. Gibler said the initial investigation, carried out by the government of former Mexican President Enrique PeÃ±a Nieto, was in itself an act of administrative enforced disappearance.

â€œThe government lied, tortured, fabricated false evidence and false testimony and destroyed real evidence,â€ Gibler said, â€œall to describe a series of events that never happened and thus hide, or cover up , the logic, the motive, the chain of command and the complete list of the participants in the attacks.

“We know that over 100 city, state and federal police officers have all coordinated to attack, murder and forcibly disappear students,” Gibler continued. â€œWe know the Mexican military was monitoring the attacks in real time and took full control of the city shortly after the police left with the 43 students. We know that the Federal Attorney General’s office committed the atrocities listed above in order to cover up the government’s involvement in the attacks.

The current administration of Mexican President AndrÃ©s Manuel LÃ³pez Obrador has completely distanced itself from the previous administration’s investigation, Gibler said. They have issued arrest warrants against numerous federal officials and at least one military officer for their involvement in the crimes.

â€œThe ongoing investigation has located two other small bone fragments belonging to two students in a location half a mile from the landfill that was the center of the cover-up story,â€ Gibler said.

Lee contacted Gibler to ask if he could use some of Gibler’s text in the original installation in Santa Clara. Gibler will discuss the events and its coverage with Vince Brown, director of the Institute of Politics at Dixie State University, in the Gardner Center ballroom on September 23 at 4 p.m. ET.

When asked why these events matter to him, Gibler said he cares about the world.

“I care about justice,” he said. â€œI care about people and people’s stories. I believe in investigating and sharing stories that reveal violently hidden truths about our world.

Gibler said he thinks Americans would do well to care about Mexico, a neighboring country that shares 1,954 miles of borders. Utah was part of Mexico until the Treaty of Hidalgo in 1848.

â€œMexico shares an incredibly deep and often charged history with the United States,â€ Gibler said. â€œI hope people will be inspired to learn more about what happened to the students and their families’ struggles for truth and justice. I also hope that people will be inspired to think critically about the issues of police brutality and social struggle in their own communities. “

Dixie State University senior Keilani Young works in the varsity theater stage store. Young, who graduated from Tuacahn High School for the Arts, divides her time between her work in the costume shop at the Tuacahn Center for the Arts and the theatrical store at Dixie State University. A stage salesperson, she will have spent around 40 hours painting and making materials that will allow the characters to stand in their place on campus.

â€œWhat turns me on about a project like this is that I can use my skills to build something that serves a story,â€ Young told St. George News.

Young grew up near Logan, Utah, so she’s not very familiar with the events that inspired the installation. When the numbers arrived, Young said she called them “the shadow guys,” which seems fitting. After spending over 30 hours cutting and assembling their stands, she has come to call them figurines.

In some ways, she is the installation’s primary audience, as she moves the characters around the store. After assembling a minifigure that displays a photo of Martin Getsemany Sanchez Garcia, one of the missing, she moves it near the center of the workshop. She plants the stand, then steps back to assess her work. Once satisfied, she moves the figure into a dark recess near the elevator.

Visit their site for a list of special events taking place over the next two weeks.

David is a journalist, educator and playwright. He has written for Zenger News, the Christian Science Monitor, the Barton Chronicle, the North Star Monthly, and the Northland Journal, among others. He has covered various beats including breaking news, court and crime, sports, the arts and entertainment. His writings on theater appear regularly in American Theater Magazine, Contemporary Theater Review (UK), ConJunto (Cuba) and HowlRound.com. David’s play, 800 Days of Solitude, on how solitary confinement affects minors and their families, received the 2018 Christian Moe Drama Writing Award. He received a BFA with First Class Honors from the University. DePaul and an MFA in dramaturgy from Southern Illinois University, Carbondale.