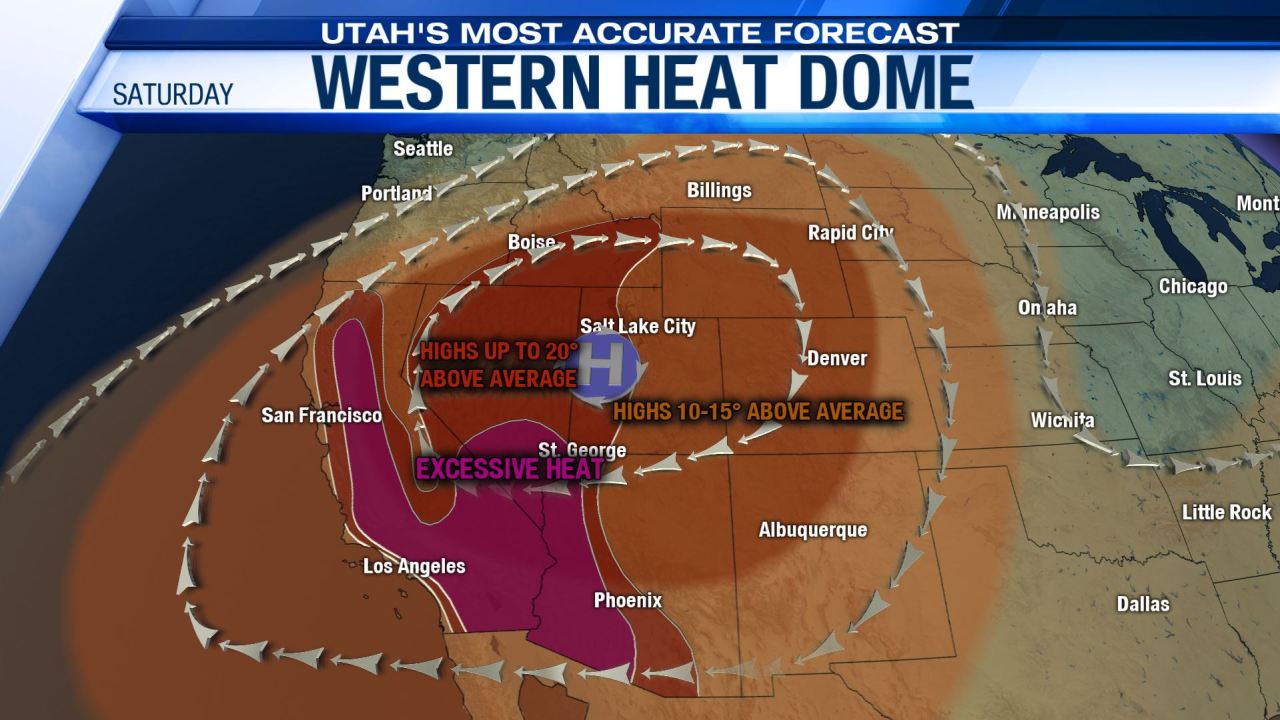 SALT LAKE CITY (ABC4) – Happy Labor Day weekend Utah! With the High Dome sitting over the western United States, we won’t see too much change from what we’ve had for the past few days, with highs ranging over 10° above the average in most places in the state. Skies will be mostly sunny to partly cloudy with only a slight chance for a few stray light showers over higher ground, mostly in the southern two-thirds of the state. In our northern Utah valleys, we will also continue to experience poor air quality, primarily due to the presence of ozone.

Going through and after this Labor Day weekend, every day is expected to have record/equal heat in Salt Lake City through next Wednesday. In Salt Lake City, there’s a chance we’ll beat the 102 we saw on Thursday (which is September’s new all-time high) by hitting 103 or even 104! We could also very well see the September temperature record drop in Logan, 97, approaching 100 this weekend! A heat advisory will go into effect for the northwest half of our region, including the Wasatch front, at noon today and will last until Labor Day Monday with a chance that it will be extended until middle of next week.

In St. George, we will be closer to 110 and due to extreme heat in lower Washington County, an excessive heat warning will be in effect from today until Labor Day. This warning now also includes Lake Powell and the Glen Canyon Recreation Area, as daytime highs could reach 107°.

Some places you can go to escape the heat will be high altitudes and near our lakes and reservoirs. One place that might not worry about hot temperatures is Bear Lake with highs near 90 over the weekend. Highs will also be close to 90 for the Wasatch Back as in Park City. If you have outdoor plans, it’s important to take the necessary precautions to beat this late-season heat. Take breaks, find shade, pack plenty of hydration, look before you lock your car, and limit time outdoors during the afternoon hours.

Looking for relief, models continue to be optimistic of at least a little cooler trend by the end of next week as a system moves or at least weakens the high. Based on model trends, cooler air should start arriving by Thursday with more seasonal air entering by Friday into the weekend. There is also a chance that we may finally see the humidity return. Cross your fingers and stay tuned!

Conclusion ? ! The heat wave will persist through Labor Day weekend.

Always stay ahead of the weather with Utah’s most accurate forecasts both live and online! We are There4You!