People celebrate life, lost loved ones at the Celebration of Life Monument 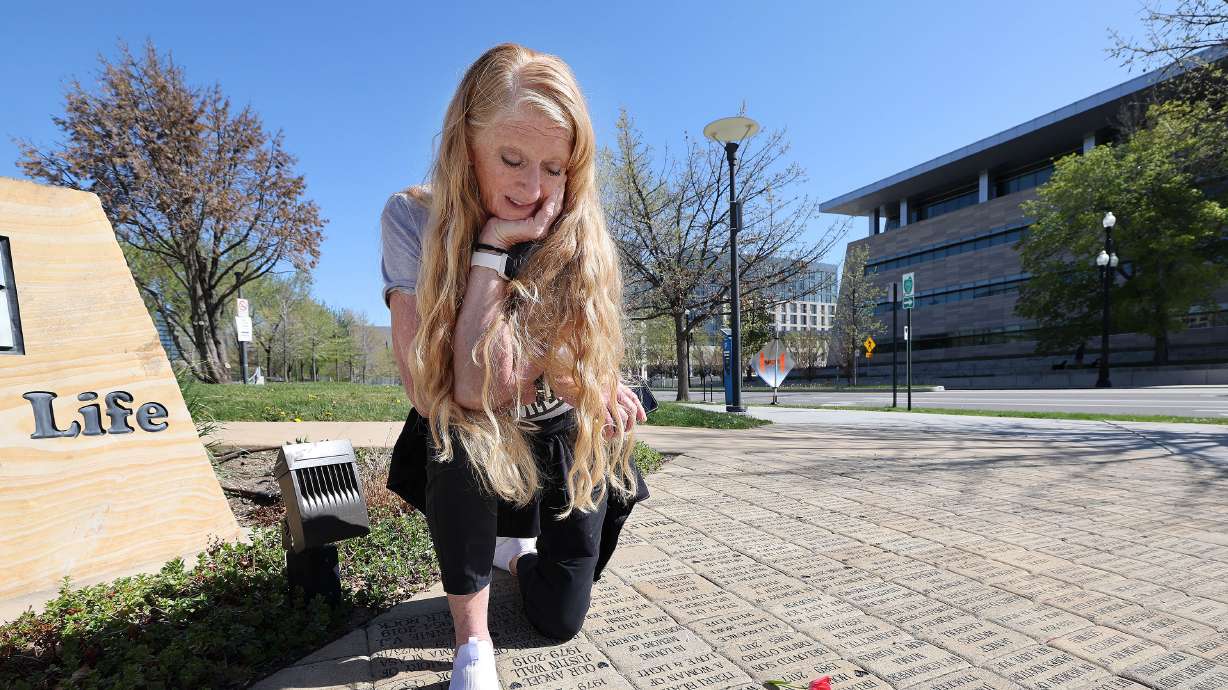 SALT LAKE CITY – Nicole’ Hillary’s husband was riding his motorcycle down to Mirror Lake with their son when a large deer came up from the ravine and hit his motorcycle. She said when she arrived at the hospital she knew her husband, Del Hillary, was gone.

“The first people I think I met were the Donor Connect people…as soon as I saw their shirts, I knew he wasn’t alive,” Hillary said.

She said as soon as they asked, she said yes and asked what he could donate, knowing that her husband had chosen to be an organ donor.

Donor Connect, an organization that coordinates organ donations and helps get them to a recipient, marked the end of April’s Gift of Life month with a celebration for donor families at Celebration of Life Monument near the Salt Lake City Library on Saturday.

The monument is usually a peaceful, reflective place where people can find the names of donors on the wall. Today there was music and celebration.

Hillary said it was beautiful to see her husband’s name on the memorial on Saturday, she said some of the same families she met at the event last year were there, all part of a large community of organ donors and recipients.

“Today I just celebrated with everyone and felt the love, and it was really cool,” Hillary said.

She had no idea how much the choice to donate her husband’s organs would be a blessing and help others until well after his death, she said.

Del Hillary was able to donate 10 different organs, helping to save the lives of several people. Nicole ‘Hillary reached out to some of them, she told them that if they wanted to buy a giant box of Cheez-Its or a Diet Coke from McDonald’s in the morning, that craving meant they had been given the organs by Del Hillary. She also told them that he was an “exceptional human” and that she wanted them to live “exceptional lives”.

She said these recipients wrote her love letters, which she said were so poignant. She said they are no longer on dialysis, are holding grandchildren and can be there for their children.

Hillary said Donor Connect supported her through the organ donation process, always responded quickly, and was loving and helpful during a difficult time in her life.

They looked at each organ individually and talked to her about it while her husband was on life support, and were loving and not pushy. She said they were by her side as soon as her husband died and continued to watch over her afterwards.

Sydney McPherson, director of donor family services at DonorConnect, said they support families for two years after they decide to donate an organ. She said that when they reach out to people who are losing loved ones and talk about the possibility of a organ donationit’s a way to give the family a glimmer of hope when a loved one dies.

“I think it helps in the grieving process, knowing that even though their loved one is gone and it’s incredibly sad, it helps them to know that a part of them still lives, you know, and the person who lives has received that life…I think it’s healing,” McPherson said.

She said she heard the word “healing” repeatedly at the event from donors and recipients.

McPherson said nationally that there was more than 100,000 people awaiting transplant in the country, so there is a great need for donors. Organs in Utah and surrounding states served by DonorConnect can be dispatched locally if needed or nationwide.

Part of Saturday’s event was the release of thousands of ladybugs into the gardens. Along with the ladybugs representing good luck, McPherson said they represent a lost loved one who comes to bring comfort.

Hillary said she put her ladybugs in trees, whereas most people there put them in grass or flowers. She wanted them to be as close to heaven as possible.

She said deciding to be an organ donor is not difficult, all it takes is a “yes” and telling the family about your decision.

“It’s not hard when your family knows what to do,” she said.

Hayden Cullimore received a liver donation at age 8 and is now 17. His mother, Tessa Cullimore, said he was born with liver disease, biliary atresia, and was on and off the transplant list and had many procedures but he became very ill shortly before he turned eight. She said she wouldn’t have lived much longer without a transplant.

“We really got lucky,” she said.

Hayden Cullimore was discharged from hospital within 10 days of the transplant, faster than expected. After a few months, he felt better than he had ever felt. He said he was not able to jump on a trampoline or play tackle football before. After the transplant, he was able to join his friends in sports.

He said his donor lived just 10 minutes from his house. She was a teenager who did not yet have a license, but had spoken to her parents before her death and told them that she wanted to be an organ donor.

Hayden Cullimore is a registered organ donor, and he makes sure everyone he knows is too. He talks to his friends and convinces them to tick “yes” before going to get their driver’s license.

“I’m standing here because someone donated,” Cullimore said. “I just make sure everyone is a donor.”

He said he helped dedicate the monument and his donor’s name is on the memorial. He said it was meaningful to him to see the names of organ donors on the wall.