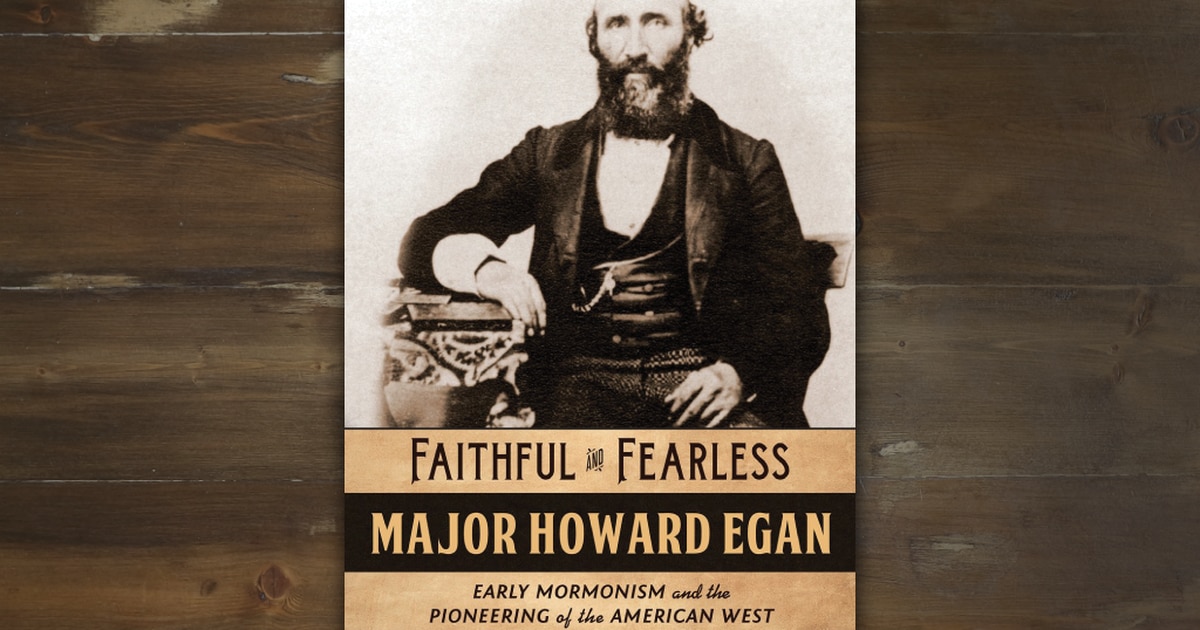 Sponsored: Who is Utah’s Outstanding Outdoorsman?

A popular saying circulating during the Second World War proclaimed “Kilroy was here”. At the beginning of the colonization of the American West, a similar saying could have been “Howard Egan was here”. More than 70 years ago, the Deseret News asked, “Who is Utah’s outstanding outdoorsman of the 1850-1950 century?” and then replied, “His name, Major Howard Egan.”

In his latest book, “Faithful and Fearless: Major Howard Egan, Early Mormonism, and the Pioneering of the American West,” the late William G. Hartley, award-winning historian and founding president of the Mormon Trails Association, describes in detail exactly where Howard Egan went and what he did once there.

In his review of “Faithful and Fearless” in Utah Historical Quarterly, the famous historian William P. MacKinnon writes that “[t]there are few major events in the development of Mormonism, the Utah Territory, or the American West during this period in which Egan was not involved in some way.

Who was Howard Egan?

“A pioneer of the first order”, howard egan is best known for being an early pioneer in Utah and for his Pony Express exploits. As Hartley convincingly demonstrates, Egan had a life of remarkable variety and adventure.

After emigrating from Ireland as a young child and being orphaned in Canada, Egan joined Britain’s Royal Navy as a sailor on a warship. He then moved to Salem, Massachusetts, where he married Tamson Parshley and joined The Church of Jesus Christ of Latter-day Saints.

From opening a rope-making factory in Nauvoo, Illinois, to working as a policeman and bodyguard for Joseph Smith and Brigham Young, Egan’s life has been full of diverse and exciting opportunities.

These opportunities included completing difficult and dangerous church missions, such as a secret mission to recover funds from the Mormon Battalion in Santa Fe; leading many large cattle drives from Utah to California; setting the record for fastest trip from Salt Lake to Sacramento (11 days by mule); become one of Utah’s war heroes; make the first mail delivery to Salt Lake City via the Pony Express; oversee Overland Stagecoach operations between Utah and California; extend friendship and missionary service to the Goshute Indians; and much more.

His adventures continued until he finally died of an illness he contracted while guarding Brigham Young’s tomb against vandals.

History — with a touch of scandal

Although Egan’s life has been exciting and adventurous, Hartley is quick to say that it has also included a lot of hardship and heartbreak.

Returning to Salt Lake City after almost two years in the California gold fields, he learned that Tamson had a new child who was not his. Although their marriage lasted, Egan confronted and killed the child’s father, James Monroe. At the first jury trial in the new territory of Utah, George A. Smith defended Egan on a “mountain common law” theory and he was ultimately acquitted.

According to a review by Brett Dowdle in BYU Studies, “Hartley deftly handles the Monroe murder and Egan’s subsequent trial and acquittal in two chapters, which provide depth and perspective on each of those involved. Hartley does not fully exonerate or condemn any of those involved in the case, demonstrating that each came from a difficult position. . . Perhaps more important than his analysis of the consequences for the individuals involved, Hartley uses the event to provide accurate insight into the social and political milieu of the first territorial Utah.

Egan raised the child, William Egan, as his own, and William later became the compiler and editor of Egan’s journals in a book called “Pioneering the West”.

Learn about the “Forrest Gump” of the American West

In a world that has grown accustomed to instant gratification and convenience, Egan’s life bears witness to the hard work and endurance that characterized early pioneers and settlers.

MacKinnon noted that Egan made six round trips between the Missouri River and the Salt Lake Valley and up to fifty long treks between the Great Basin and the Pacific Coast.

“After reading ‘Faithful and Fearless’ and digesting what this Forrest Gump-like trailblazer accomplished in disheartening circumstances, many of us will feel lazy,” he wrote.

However, readers will also get a better appreciation of a bygone era that laid the foundation for the modern American West.

The seminal work of a famous Church historian

“Faithful and Fearless” is not simply a family history or a biography intended for a limited audience of enthusiastic parents. While the book certainly includes these elements, in reality it is the ultimate achievement of Hartley – one of the leading historians of the steps, ways, and people who established the American West.

After a lifetime of historical research, Hartley spent the last five or six years of his life writing this scholarly volume consisting of approximately 600 pages, including over 100 pages of source documents, over 200 images and nearly 20 original maps. . Fortunately, Hartley lived long enough to see her book published before she died a few months later.

Even professional historians were surprised by what they learned from “Faithful and Intrepid”. The tens of millions of people currently living in the western United States might also be surprised to learn more about some of the historical foundations of their cities, roads, and infrastructure.

Buy your copy of “Faithful and Fearless”

The publication of “Faithful and Fearless” is a non-profit enterprise. The book is available at Amazon or by emailing [email protected] while supplies last.