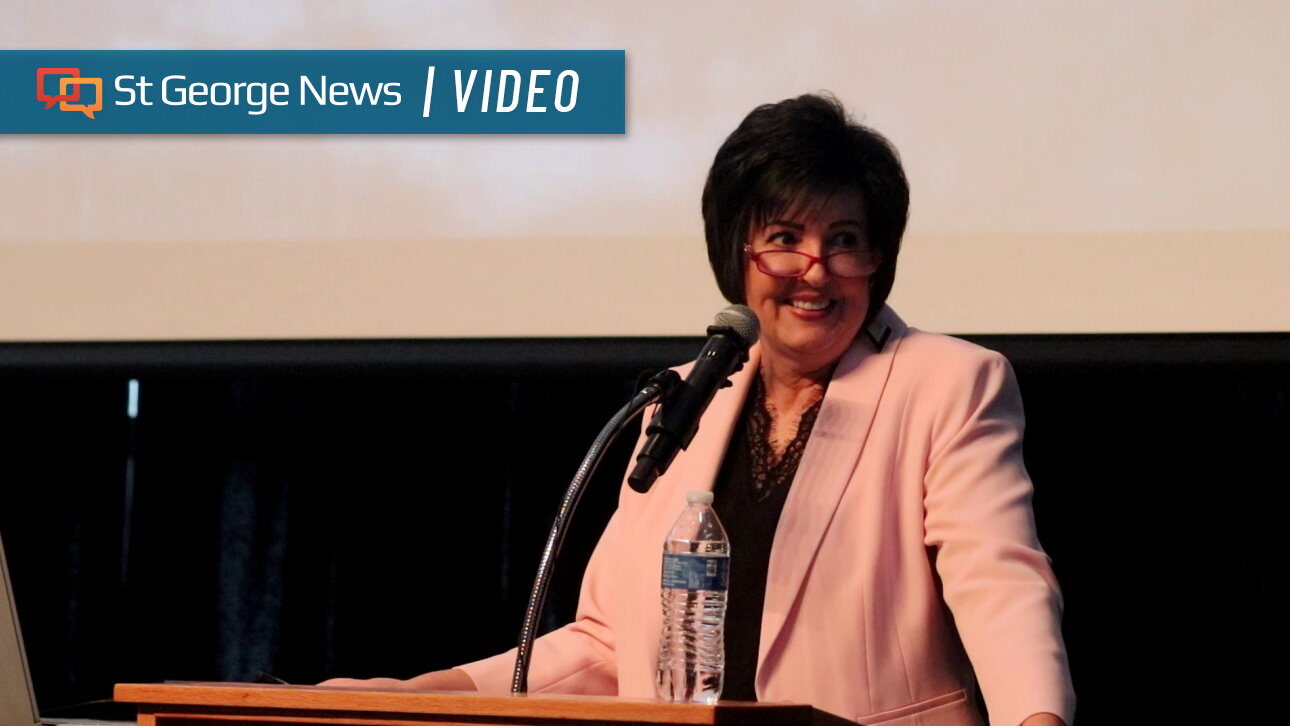 ST. GEORGE- It has been two years and three days since the last State of the City address was given, St. George Mayor Michele Randall said Tuesday afternoon as she began the 2022 address at the Dixie Convention. Center.

“A lot has changed since then,” Randall said. “No one could have ever predicted a global pandemic on the scale we had. …And neither could we predict that a pandemic would make everyone want to move to Utah, including our little one. corner of paradise.

The issue that took center stage at the start of the speech was water and the need to conserve it.

Large blue barrels representing nearly 1,000 gallons of water were stacked on either side of Randall on the stage. A large price tag listed the average cost to St. George water users for every 1,000 gallons they use in a month: $1.10.

“It’s still very cheap, and we need to start treating it like liquid gold. If we don’t start getting smarter about conservation, we’re going to have to raise our rates, and we really don’t want to do that.

The region is currently in a state of moderate drought. It’s better than this time last year, Randall said, but conservation still needs to be observed. To help lead this process, the city has done its own conservation work, she said.

During the summer of 2021, the city was able to reduce its water use by 8.2% despite adding 1,900 new connections, Randall said, attributing the water savings to residents.

“It’s thanks to you,” she said. “So congratulations.”

Parks and golf course staff also managed to save more than 150 million gallons of water last year, she said, adding that about 10 acres of non-functional turf — that is, i.e. grass that appears to serve no purpose other than being mowed – is also in the process of being removed from city property so far.

Randall said public safety has always been a priority for her, and in this area she said that over the past four years the city has increased its fire and police forces by 70% and 30%, respectively. A campaign is currently underway to recruit additional police officers as continued growth makes additional officers needed, Randall said.

In addition to the recruitment campaign, a safety campaign called “Watch Your Six” will also soon be launched by the St. George Police Department, she said. The campaign will focus on safe driving and how to avoid getting into a wreck.

The mayor also announced the construction or planning of new fire stations, including the following:

The themes of growth, economy and housing were entrusted to Shirlayne Quayle, director of economic vitality and housing for the city.

After commenting on the growth, Quayle moved on to the city’s continued need for affordable housing.

“Housing is really a challenge in our community,” she said.

One way the city hopes to address the local housing crisis is through the Housing Action Coalition, Quayle said. It is a collaborative effort between the city, other municipalities, Washington County, homebuilders, developers, real estate agents and other stakeholders coming together with the goal of creating more accessible for St. George and county residents.

Quayle also pointed to the communities of Divario, Desert Canyon and Desert Color as developments that helped bring much-needed inventory to the housing market. The Switchpoint Community Resource Center and the Dove Center were also mentioned for their work in providing affordable housing for low-income individuals and families.

Economically, Quayle praised the city’s partnership with Tech Ridge. Located on the southern half of Black Hill, where the original airport was located, the 180-acre Tech Ridge development will be a mixed-use technology park designed to provide the city with well-paying tech jobs. The area is already home to Dixie Technical College and tech companies such as Vasion and busybusy, with more expected to expand in the near future.

Turning to transportation infrastructure, Cameron Cutler, director of public works for the city, reviewed the completion of work on River Road last year, as well as ongoing work on the 3000 East Corridor, which is the most major city road project for the year.

Cutler also said the property was purchased on the west side of the 1450 East and River Road intersection. Securing the property is one of the first steps in the eventual creation of a new road linking River Road and Crosby Way near the Dixie Convention Center.

A number of upcoming events were highlighted by the mayor when she returned to the stage.

Scheduled for February 27, St. George, along with other cities, will participate in a cleanup effort along Interstate 15. The event is sponsored by the nonprofit Love Where You Live which promotes the keeping Utah waste-free, Randall said.

The Gold Star Families Memorial, which has been in the works for over a year but has been delayed due to the pandemic and supply chain issues, has finally arrived in St. George and will be welcomed into St. George Square Town on March 20. at 11 o’clock

The city will also host a new series of Neighborhood Open Houses in 2022, featuring elected officials and city department heads responding to questions or comments from the public.

“This is where we bring the city to your neighborhood,” Randall said.

St. George, and Washington County as a whole, will also host the Ironman 70.3 World Championship and Ironman World Championship that year. Estimated to potentially generate up to $100 million in total, Randall said Ironman officials chose St. George over other locations because of the people here and the spirit of volunteerism.

Before ending the address for the year, Randall commented on the town’s slogan “The Brighter Side”.

“I think we feel in St. George that it’s a special place to live, and we want everyone to feel like they’re living on the good side of our community,” the mayor said, pointing to the audience. “We are on the right side thanks to each of you. We couldn’t do what we do without the wonderful residents of our community.

The City State 2022 address can be seen in full below.

Mori Kessler is a senior reporter for St. George News, having contributed as writer and acting editor in 2011-12, and associate editor from 2012 to mid-2014. He began writing news as a freelancer in 2009 for Today in Dixie and joined the editorial staff of St. George News in mid-2010. He enjoys photography and won a Society of Professional Journalists photojournalism award for a 2018 photo of a bee inspector removing wild bees from a Washington City home. He is also a shameless nerd and has a poor sense of direction. 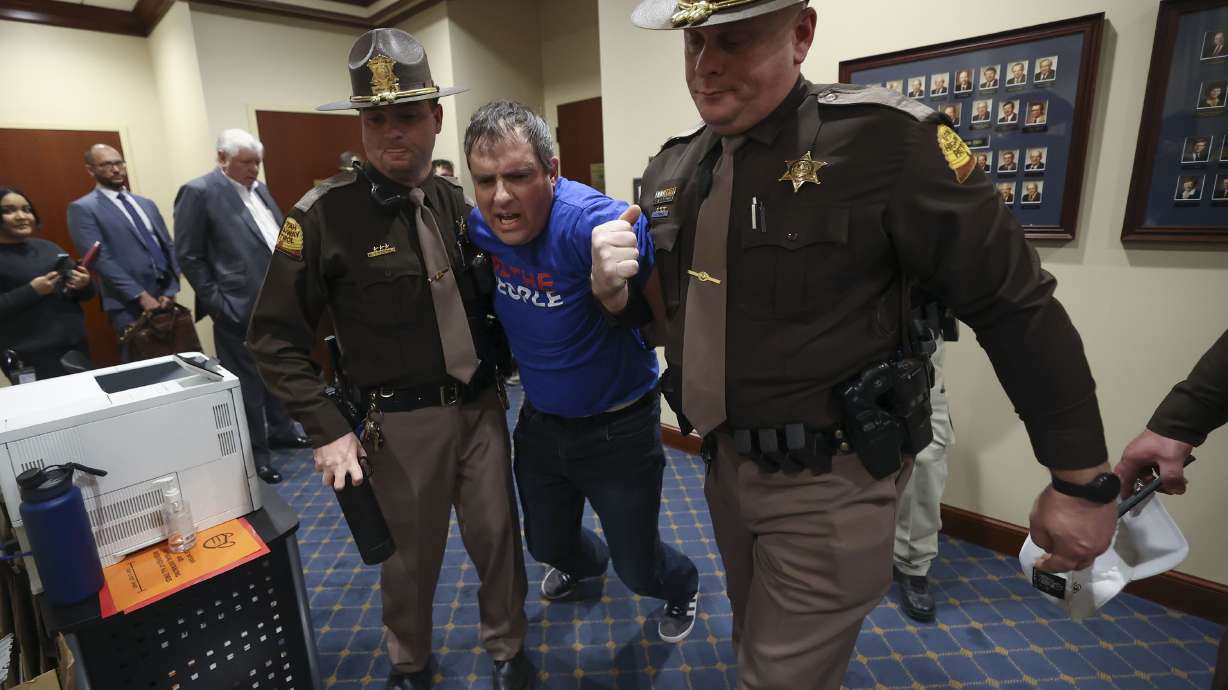