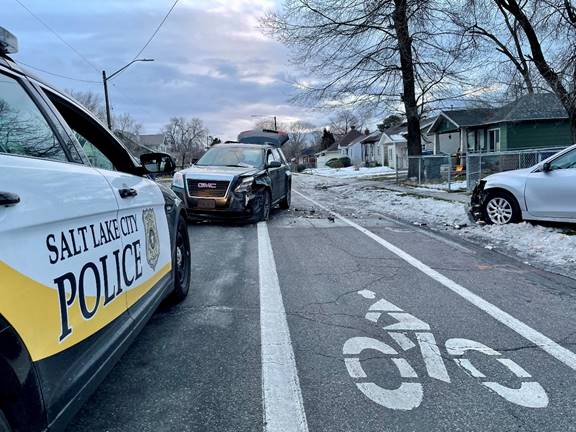 SALT LAKE CITY (ABC4– On Friday, December 24, Salt Lake City police arrested a 28-year-old man after crashing a stolen SUV, running away from officers and trying to hijack a person in a car.

SLCPD officers say around 7:13 a.m. they received a call regarding a possible impaired driver in the 800 South and 1000 West area. It was reported that the suspect’s vehicle was traveling at high speed across the Jordan River. They also reported that at some point the vehicle passed through oncoming traffic.

The crooks pose as SLCPD agents

As officers entered the area to search for the suspect’s vehicle, the driver, at high speed, crashed into a parked car near the intersection of Indiana Avenue and Montgomery Street. A witness reported that the driver got out of the vehicle and walked west.

When an SLCPD sergeant located the suspect walking on Redwood Road near 1000 West, the suspect immediately ran to a nearby car wash. Officers said the suspect attempted to steal someone’s vehicle from inside the car wash parking lot.

Due to the suspect’s jacket, the deployment of an officer’s Taser did not work. An SLCPD officer and sergeant managed to prevent the suspect from escaping and took him into custody without further incident.

During the investigation, officers learned that the vehicle the suspect was driving was reported stolen in Salt Lake City. Inside the stolen vehicle, officers found several other items, including a birth certificate, passport, several cell phones, and a vehicle registration card, all of which appear to be suspected theft.

Officers also determined that the suspect had at least one active felony arrest warrant at the time of his arrest.

The suspect’s name will not be released until he is incarcerated in the Salt Lake County Metropolitan Jail.

The victim of the attempted carjacking was not injured.

No additional information is available for publication.