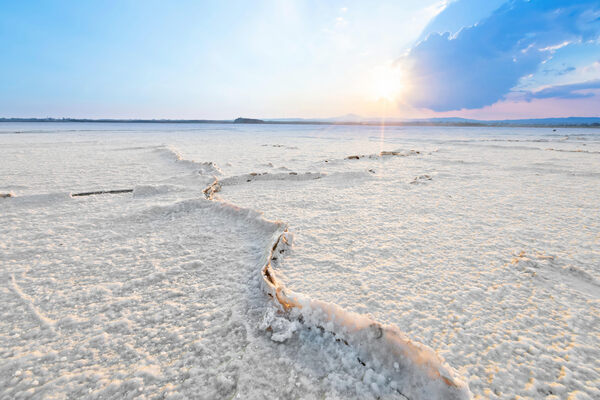 The Larnaca Salt Lake has the same ephemeral beauty of a mirage or an oasis. Known as Î‘Î»Ï…ÎºÎ® Î›Î¬ÏÎ½Î±ÎºÎ±Ï‚ in Greek and Larnaka Tuz GÃ¶lÃ¼ in Turkish, this sparkling otherworldly lake is actually a complex of wetlands: Alyki, Orphani, Soros and Spiro, in descending order of size.

Only the largest, Alyki, is a real salt lake. In total, the wetlands and lake include 4,352 acres (1,761 hectares). While this brackish body of water is actually smaller than the Limassol Salt Lake, making it the second largest of its kind in Cyprus, it is arguably the most important.

The summers of the small Mediterranean island don’t see much rainfall. As a result, the lake becomes so dry that in some areas all that is left is an exposed layer of hardened salt. In winter, however, heavy rains flood the island and the lake fills up again. In these waters, ostracods (seed shrimps), Branchinella spinosa (shrimp fairy), and Saline Artemia (a species of brine shrimp) spread and are an essential food source for the flamingos that use the island as a resting place during their annual migration. Wild ducks and gulls also frequent the lakes, enjoying the salty snacks found there.

In addition to its importance as a biotope, the salt lake of Larnaca and its surroundings are historically important. Before the sediment deposit closed the salt lakes, they formed a lagoon connected to the Mediterranean Sea. This lagoon was the largest cove in Cyprus and was used as a port during the second millennium BC. Larnaca, known as Kition, was one of the most important trading posts in the ancient world, which is hardly surprising, given its strategic location in waters easily accessible from Africa, Asia and Europe.

There is even evidence that as the two natural canals connecting the lagoon to the sea became increasingly shallow due to the aggregation of particles, the Bronze Age Cypriots dug an artificial canal in order to to keep the port city in business. Beyond its convenience and accessibility, the port was important due to Kitium’s huge salt export business.

While this information has given the impression that the saline nature of Larnaca Salt Lake is the result of seawater, it is in fact not. Water from seasonal rains fills the area, eventually dissolving a huge underground reserve of salt. Once the water evaporates, the remaining salt / water ratio is increased, resulting in a flat plain of dry salt during the drier months.

The lake also figures prominently in Christian and Muslim traditions. Christians believe that a hungry and thirsty Saint Lazarus asked a wealthy vineyard owner for food, and she lied, saying his vines were dry. For his heartless greed, Lazarus allegedly cursed his land to become a salt lake.

For Muslims, the area is important because Hala Sultan Tekke, also known as the Umm Haram Mosque, is located by the lake. This mosque serves as a sanctuary for Ubada bint al-Samit, a companion (some say nanny and adoptive mother, although this is disputed) of Mohammed. She is said to have died here falling from a mule during the invasion of Cyprus by Caliph Muawiyah I in 647. Later, the mosque became a residence for Sufi dervishes, known to worship God through beautiful dances and songs.

The Lake Powell Pipeline Project Is Moving Forward … A Little

Psychedelicatessen in Troy closes in June