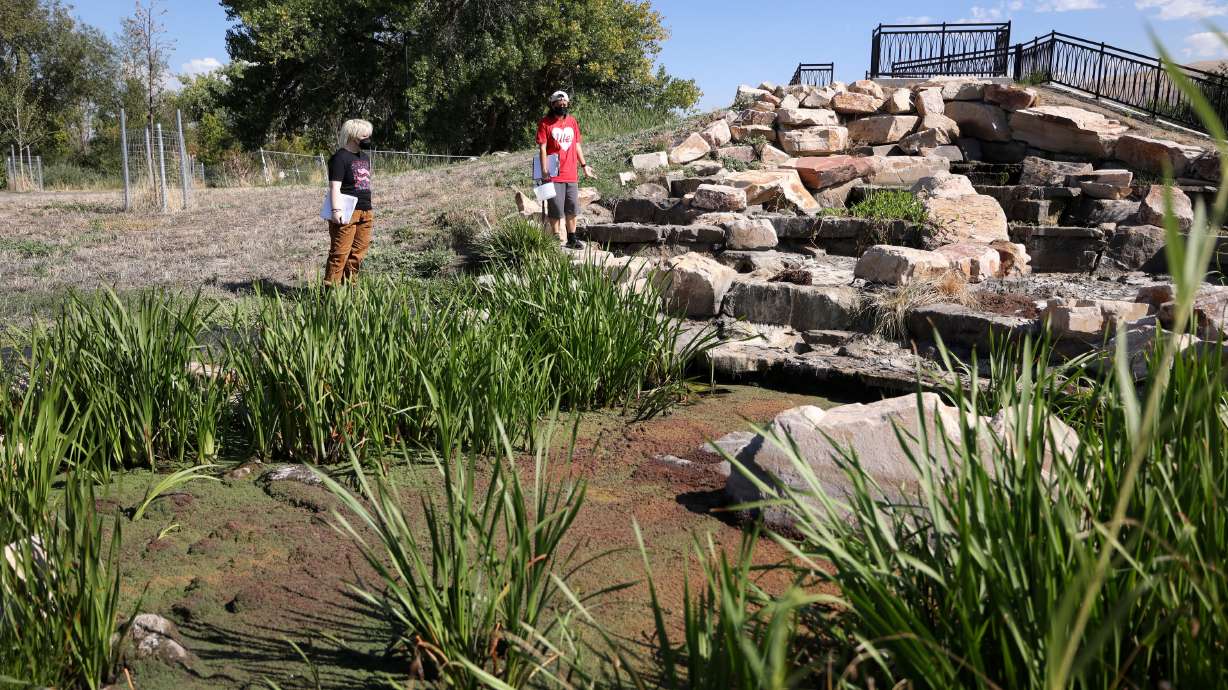 On Thursday, Horizonte student Oakland Voright and her teacher Nat Shiozawa discuss their observations around the Cascades region of the Rose Park Jordan River Watershed Project Cornell Wetland Area in Salt Lake City. The feature helps dissolve oxygen in the water and also has a hydrodynamic separator that mechanically removes debris and sediment from the water. (Kristin Murphy, Deseret News)

Editor’s note: This article is published through the Great Salt Lake Collaborative, a solutions journalism initiative that brings together news, education and media organizations to help inform people about the plight of the Great Salt Lake – and what that can be done to make a difference before it’s too late. Read all of our stories at greatsaltlakenews.org.

SALT LAKE CITY — West Jordan Mayor Dirk Burton reflects on his childhood as he stands just a few blocks from the banks of the Jordan River.

There is a memory from decades ago that comes to mind. One year, his father spent months building a fiberglass canoe in the backyard of the Kearns family home. They decided the Jordan River was the perfect place to test this homemade boat, so they cut through the overgrowth in the area and dunked the boat in the water.

It wasn’t exactly smooth sailing. They had to get out of the boat and portage through obstacles from time to time. This was the case for years after more than a century of neglect of the Jordan River, which flows from northern Utah Lake to the Great Salt Lake.

That began to change with the launch of “Blueprint Jordan River” in 2008. The document eventually outlined plans to make the Jordan River a more desirable — and navigable — recreational attraction. It even led to the creation of the Jordan River Commission, a group of governmental and non-governmental entities that seeks to improve the river corridor and create more connecting trails along the river.

“Today when we go to the river and look at it, we can see the fantastic changes that have happened over the years, how much more usable it is,” says Burton, who is also president of the Jordan River Commission. Board of Directors. “If you think the past was exciting, wait until you see what the future holds.”

The commission and other groups gathered near where the river flows in the Rose Park neighborhood of Salt Lake City to reveal details of the river’s first updated plan since 2008. The revised document will focuses more on water quality and quantity this time around, including finding ways to provide more water to the struggling Great Salt Lake.

The nonprofit organization Envision Utah, which created the original plan, and the Jordan River Commission began updating the plan through a series of surveys in 2020, collecting input from more than 8 000 people. Almost a quarter of these respondents said that water quality and quantity were their top priorities for the future of the river. Another 16% said maintenance and cleaning were their top priorities.

Safety (14%) and the protection of natural habitats (13%) were next in importance, while travel to and through the boardwalk and recreation fell on the list of priorities, according to the survey results.

Soren Simonsen, the commission’s executive director, believes the two-decade-long “mega-drought” and record Great Salt Lake levels appear to have altered what people want to see from the river, which he calls a ” microcosm” of the struggles of the lake.

“The Jordan River is one of the main tributaries of the Great Salt Lake, so if the river is not healthy, which it is not because of the diversions and use of water, the lake is not healthy,” he said. “What we’ve highlighted in this Jordan River Blueprint update is that you can’t approach (the) river without looking at the entire watershed.”

Chris Cline, chair of the U.S. Fish and Wildlife Service’s technical advisory committee, said the quality of the Jordan River has improved dramatically since it moved to the Salt Lake Valley in 1983.

The river was, in his words, a “place you wanted to stay away from” nearly 40 years ago, largely due to chemical discharges into the river from mining and smelting industries. These discharges also helped lead to current programs with the “toxic dust” of the Great Salt Lake.

Cline says the increase in the river’s “community value” since the 1980s has made the river much more desirable. Still, the Jordan River is no exception to the problems plaguing urban waterways, says Jodi Gardberg, manager of the Utah Division of Water Quality’s watershed protection program. These problems are now E. coli and programs with dissolved oxygen, which is necessary to sustain aquatic life.

Drought conditions have only exacerbated these problems. The division is currently trying to find ways to educate pet owners on how to prevent feces from ending up in the water, the main contributor to E. coli contamination. They are also working with various entities to “increase” flows to improve oxygen levels in the lower Jordan, according to Gardberg.

These, Simonsen explained, include weed management, as well as restoration and management projects in the area. Last year’s projects even included the removal of a dam in the southern region of Jordan, which improves water flow in the river. More such projects are expected in the future, on the 3,800 square miles connected to the river’s watershed.

The document lists the goals of “restoring and enhancing” existing wetlands, developing “non-irrigation restoration practices” and diversifying native and “desirable” plants, as ways to help improve the ecosystem the along the river. It also aims to improve water quality at Utah Lake and at places along the course of the river where runoff flows into it in Utah, Salt Lake and Davis counties.

Other plans call for a geomorphological assessment of the river to better understand the hydrological functions of the river, as well as the development of a “hydrological model” that improves water movement. This includes restoring the river’s “floodplain corridor” in all possible areas.

“Flows down the Jordan River will improve dissolved oxygen levels but also have the added benefit of delivering more water to the Great Salt Lake,” Gardberg said.

Other elements of the plan outline strategies to improve river recreation, such as improving parks and natural areas along the Jordan River Parkway and the trail itself. It also calls for more access points to the river and ways to enjoy it, such as through walks that are accessible to people of all abilities.

While the first plan improved the Jordan River, Ari Bruening, CEO of Envision Utah, points out that the review is a new starting point. It’s the start of an effort to improve the Jordan River and bring it back to the kind of river it was before it was damaged by human activity.

That’s why he believes the document has the potential to leave a “wonderful” legacy for future generations.

“With this vision, this Jordan River can become an even greater asset to Utah,” he said. “It is an essential element for our quality of life and a key element for our watershed. It’s a ribbon of natural habitat through our urbanized area here, a migration route for many species as well.