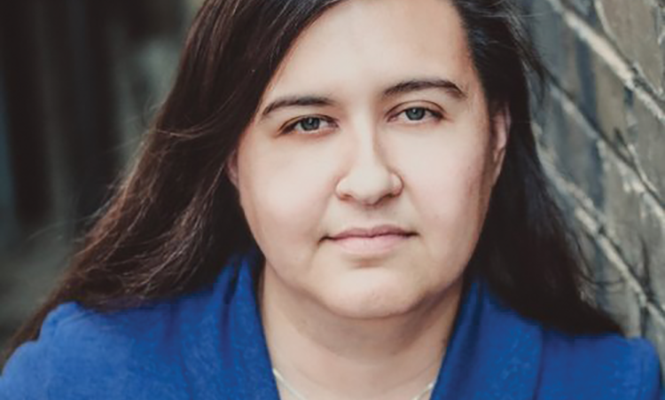 When I ask playwright Melissa Leilani Larson if it’s a good or bad thing to ask questions about racial identity when it comes to her play Mestiza or Mixed, she acknowledges that the question itself is about the complex relationship she has with her own racial identity. And the play is a way of struggling with that relationship.

“I feel like I’m in that in-between,” Larson says. “Because of my mixed identity, I’m coming to terms with being more comfortable identifying as a BIPOC person.”

Larson’s mixed heritage — an American-born and raised white father in southern Utah and a Filipina mother — is part of the foundation of Mesitza or Mixed. The playwright creates a counterpart for herself in protagonist Lark Timon, a struggling filmmaker whose career, defined mostly by disappointment, might get a big break, but which forces her to question her identity.

There is a bit of irony in the fact that Métis appears in the middle of a Plan-B Theater Company season that artistic director Jerry Rapier has promoted as the first-ever from a Utah company made up entirely of new works by playwrights of color. Rapier himself played a part in encouraging Larson to create the piece, she said when talking with him about feeling like she was in that “in-between place”.

“We started talking about it at the start of the pandemic,” Larson recalled. “He said, ‘You should put it in a play, it’ll be awesome. …Sometimes good theater is all about being vulnerable. But I thought, ‘I write dramas and my life is boring.'”

Shaping the story of Métis required him to “create drama for drama’s sake,” Larson says, but a lot of it came from a very personal place. She acknowledges that creating something that was so much closer to her autobiographically – unlike many of her theatrical and screenplay projects, which often involved historical figures – presented unique challenges.

“Cutting that vein stings a little more when you know people,” Larson says. “It’s more about me, and there are parallels between me and Lark. But some of them [the difficulty] was, ‘this is my family’, and that’s really hard. …It’s tricky, because while I think it’s probably fine to write about me once I get over that, it’s not as easy to write about people close to me from the same way.”

It’s important for her to note, however, that the autobiography can only be the start of something if it tells a story that an audience can connect with. Connect everything too a lot with yourself, as a writer, and you missed an opportunity to dig deeper.

“When you’re writing a character, creating that character is a very personal thing. Sometimes part of the writing process is asking yourself, ‘What would I do in this situation?’ Sometimes it’s just a placeholder; we don’t want all the characters to be me. … It’s about fleshing out the world and making everything as real as possible. I tried to take what I felt real and to move beyond that place to do something else and make that experience real for the audience.”

Part of creating a separate world for Lark in Métis placed less emphasis on the playwright’s own identity as a member of The Church of Jesus Christ of Latter-day Saints. Faith has had roles in many of his other works, including his screenplays for Freetown and Joan and Emma, and Larson has proven adept at approaching the subject of faith in a way that is neither simplistic nor encouraging for her church. For Métis, however, wanted to keep the focus on other elements of his identity. “I think you could argue that this family shares my faith,” she said, “but that didn’t affect that story, so it didn’t come up.”

In place, Métis stayed true to her roots by talking about parts of her identity that are not always easy to define simply. The complexity of the lines between races, especially when it comes to people of mixed race, is why Larson says it sometimes feels simplistic to him when people use the phrase “representation matters” related to artwork.

“It’s a phrase that gets used a lot now, and I’m glad to see more directors and actors of color coming to the fore and telling stories,” she says. “Sometimes it feels like when you talk about race, which is so nuanced and complicated for a lot of people, this very complicated issue comes down to the simplest common denominator.

“When people talk about the importance of representation, I didn’t really expect it, because I don’t see people who look like me. … When I think of my family, I don’t really seen a family that looks like mine. [portrayed in art]so maybe I have to build it myself.”