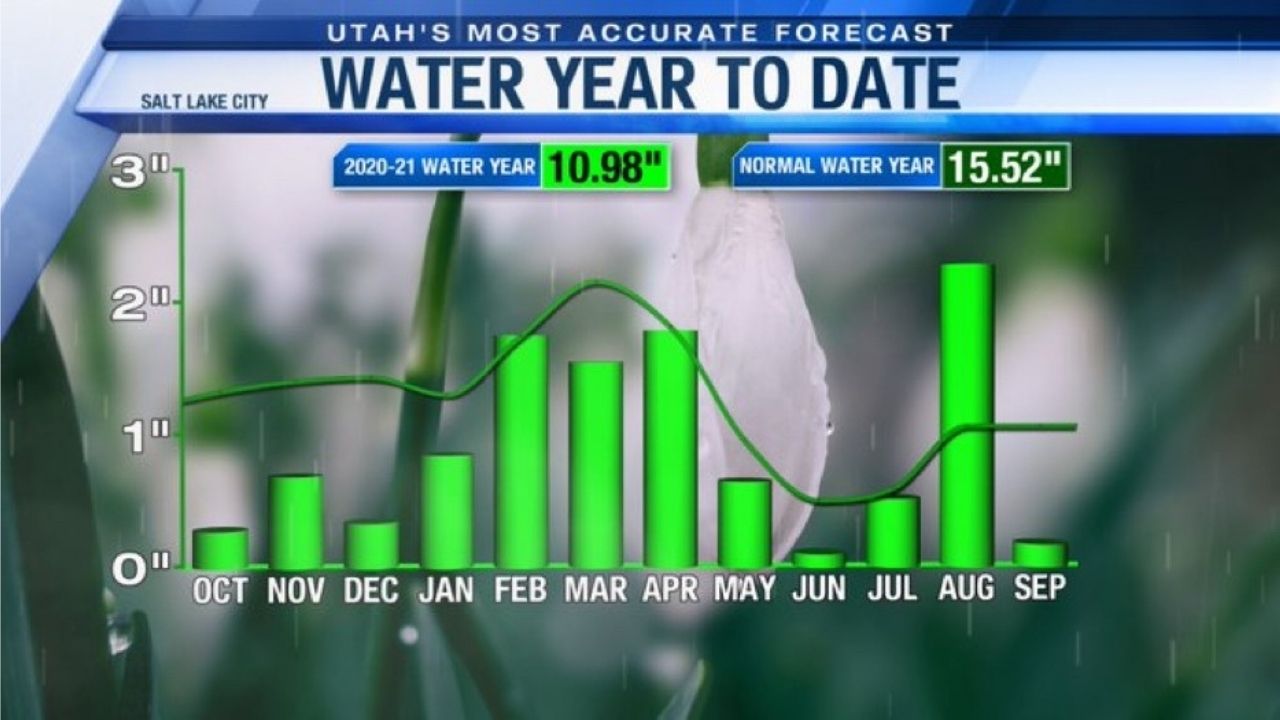 October 1 marks the start of our new water year, and after the hottest summer on record and historic drought conditions, the state as a whole would benefit from an active storm pattern with lots of rain. and snow.

September is our last month of the water year, and in Salt Lake we only had four days of measurable humidity. We were well below our average of 1.06 for the month, receiving only 0.17 of rain for September, and lower monthly precipitation totals are having a big impact on our hydrologic year.

Our last year of water has ended in Salt Lake City and the final numbers are grim.

Will the cool weather continue or will it warm up this weekend?

Have we been drier? Yes. Are we a desert climate? Yes. Water is one of Utah’s most precious resources and, looking at the past decade, this year is the third driest. We only beat the 2017-18 season, as well as last year. The water year starting October 1, 2017 and ending September 30, 2018, brought only 10.5 â€³ of precipitation to Salt Lake City, making it the 9th driest water year ever. registered for the city.

In the last eleven years, our best and one of the wettest years on record: 2010-2011. That season 23.64 â€³ of precipitation fell, making it the 4th wettest water year ever. We also recorded healthy totals in the 2018-19 season, with Salt Lake harvesting over 21.5 inches of rain.

The first day of October brings the fall sun to Utah

One of the best ways to visualize the Utah water scenario is to visualize it as a savings bank account. When we have water in our reservoirs, we have money in the bank. Wet weather can be thought of as deposits, but dry conditions leave us with a drain on our savings. We are battling back-to-back dry years, which has left us depleting our savings, and we have seen water restrictions as a result. As we move forward, an active storm pattern this fall and winter would benefit the state.

We have seen a strong monsoon this year. You may remember the flash floods in our national parks and in our southern Utah communities like Cedar City, Delta, and St. George. Summer rains helped reduce the drought monitor in the southern part of the state and allowed some towns in southern Utah to see above-average monthly rainfall. For example, St. George received 0.72 â€³ of rain for the month of September, while Salt Lake received a meager 0.17. As we close this water year and start anew, a fifth of Utah remains in exceptional drought, with the Wasatch front included in this category.
For storm updates, stay with the Pinpoint Weather team live and online. We are There4You!

1,000 rallies for the Women’s March in Utah to protest against anti-abortion laws