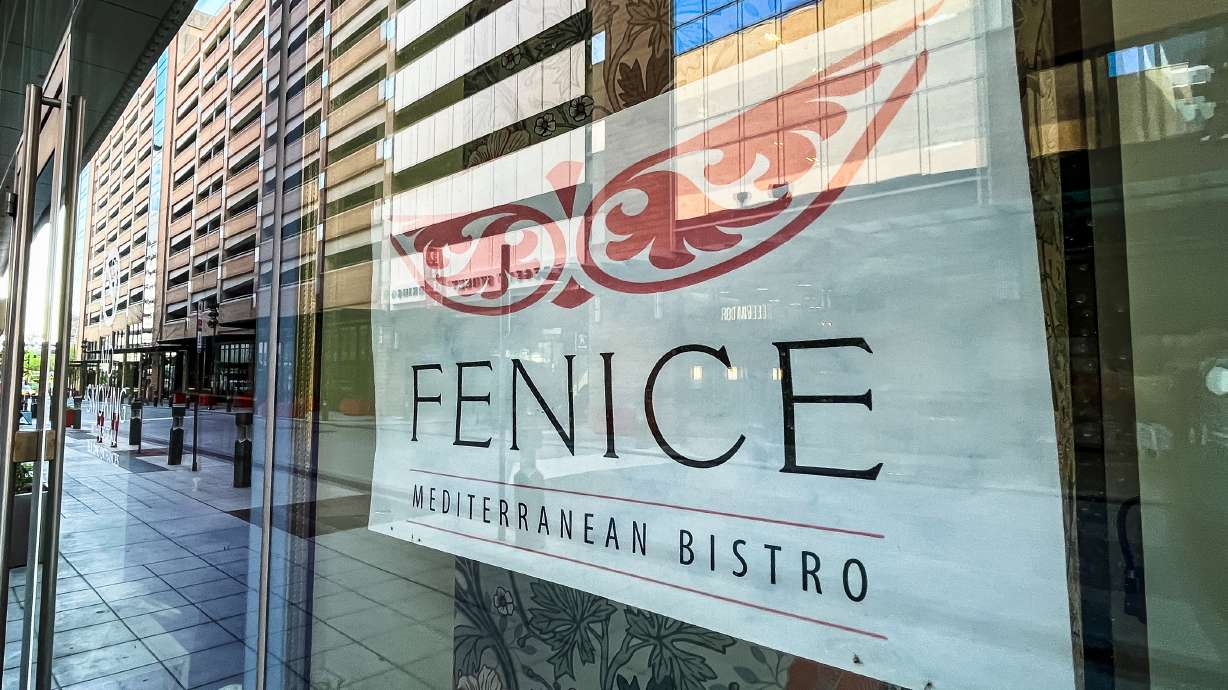 A sign outside the Fenice Mediterranean Bistro in Salt Lake City on Wednesday. The owners announced this week that they are closed indefinitely due to “many challenges facing small businesses”. (Carter Williams, KSL.com)

SALT LAKE CITY — A restaurant in downtown Salt Lake City has closed indefinitely due to “many factors,” including ongoing labor shortages, according to its owners.

The owners of the Fenice Mediterranean Bistro, located at 126 S. Regent Street, posted the message in a letter on the building’s front door on Sunday.

“Due to the many challenges facing small businesses in today’s economy, we have made the difficult decision to cease operations,” the letter reads in part. “Many factors are involved in our decision, and while our business levels have not been consistent, we have not sufficiently anticipated how difficult it is to staff the restaurant in the current economy. We just don’t have enough help to operate successfully.”

Jeff and Lisa Ward, who also own the popular Silver Star Cafe in Park City, opened the upscale downtown restaurant last year, according to Utah Food Magazine Gastronomic SLC, which first reported the closure. The outlet noted that the location behind the Eccles Theater replaced Fireside On Regent, a restaurant that closed in 2019.

The Wards described Fenice as the “sister property” of the Park City cafe on the restaurant’s website. It also seemed to be a hit with customers in its run, earning a 4.5 star rating on Yelp and 4.4 out of 5 stars on Google Reviews.

“Just an awesome experience,” wrote one customer. “The food itself was innovative without losing focus on great, balanced flavor.”

The note outside the building, however, raised hopes of a comeback.

“We will take some time to reassess the business to determine if it is possible to continue operations at a later date,” the note added. “We thank you for your support and wish you all the best. Please visit us at our Park City restaurant, the Silver Star Café.”

The closure of Fenice comes after Mazza, a Middle Eastern cuisine restaurant in Salt Lake City, recently reduced its opening hours and increased its prices due to inflation and the “rise in the cost of labour”.“

Utah’s unemployment rate remains steady at 2%, compared to the national average of 3.5%. Mark Knold, chief economist at the Utah Department of Workforce Services, explained in a report published last week that the economy is currently experiencing workforce changes, which may impact some businesses.

“Nationally, baby boomers are leaving the labor force faster than new ones are entering it,” he wrote. “This produces unfilled jobs, reduces GDP, makes it difficult to find labor and contributes to higher inflation through increased wage bidding. This labor shortage is why a negative change in GDP does not turn into a recession in employment.”

New Western increases its affordable housing inventory in the United States by 6,540 in 2022 without building a single house