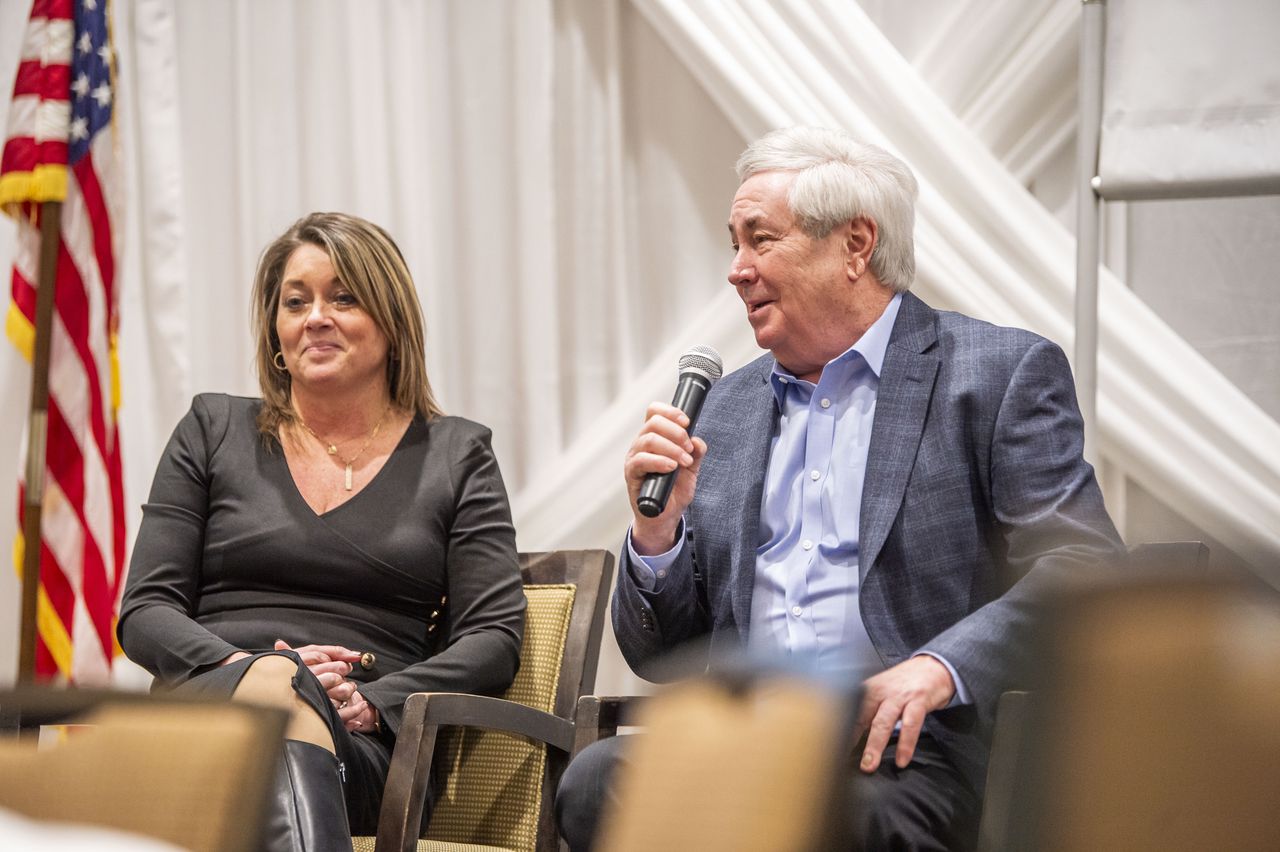 BAY CITY, MI — Bay County leaders and stakeholders gathered at the Double Tree this week for lunch to reflect on their communities and the future they face together.

The 22nd annual State of the Community event took place on Tuesday, February 15, 2022. About 300 people registered for the event, according to organizers, making it one of the largest Chamber events since the onset of the COVID-19 pandemic. The 2021 event was held virtually due to the pandemic.

As 2022 approaches, Bay County leaders have focused on the challenges ahead and the strengths and strategies that communities have to meet those challenges. Bay City Manager Dana Muscott and Bay County Manager Jim Barcia were the keynote speakers for the event.

“Bay City is emerging for the pandemic and is ready for positive, transformational change,” Muscott said.

2021 has been an eventful year for Bay County, with the return of several festivals and the introduction of new attractions for visitors and residents. Another major event in 2021 was the deployment of the COVID-19 vaccine in Bay County. Barcia applauded the efforts of the Bay County Health Department during his state of the community address.

“I am proud of the Bay County Health Department and their diligent work on behalf of our residents,” he said. “Our Public Health Officer, Joel Strasz and his team have overcome every obstacle they have faced during this pandemic.

Barcia explained how the health department was facing difficulties such as low supply and high demand for vaccines while facing the challenge of how to roll out vaccination clinics for thousands of people while ensuring social distancing. .

“The Bay County Health Department provided more than 50,000 of the more than 110,000 voluntary vaccines our residents received in 2021,” Barcia said. “It’s an incredible achievement.”

Several companies also announced major investments in Bay County and Bay City. Semiconductor wafer maker SK Siltron CSS announced this summer that it plans to invest $300 million and in turn create up to 150 high-paying skilled jobs in Bay County over the next three years. Brine mining company Wilkinson Minerals announced this year that it would invest $150 million in a salt brine operation. Additionally, Michigan Sugar announced this year that it would invest $65 million to build a desurgarization facility at its plant at 2600 S. Euclid Ave. in Monitor Township of Bay County.

“The colossal investment that these 3 organizations will put into our community is nothing short of spectacular,” Barcia said. “Bay Future and the Chamber will continue to have my full support as they continue to progress towards growing our business base and our employment opportunities.”

Another type of investment has also been noted for Bay City – the real estate market is becoming more active. Muscott also noted that home sales increased significantly in the city in 2021.

“I announced last year that more homes were sold in Bay City during the pandemic than in the past five years. Well, that record has been broken again,” Muscott said. of 13 in Bay City have been sold, equating to a total of $80 million, with a median sale price of $82,000 One thousand homes sold in 2021, 53 of those homes were rental properties that were converted as owner-occupiers.

Federal funding for the future

A major focal point that Muscott and Barcia focused on was the major federal funding windfall the county and city received from the American Rescue Plan Act (ARPA). Bay County received $20 million in ARPA funding while Bay City received a separate award of $31,076,578.

“I think most of us can agree that we won’t see comparable funding of this nature in the foreseeable future, and every municipality has a unique opportunity to make an impact and affect lasting change in their community. “, Barcia said.

The forecast showed a continuing downward trend to 94,759 residents in 2035 and 86,280 in 2045. The Bay City Times previously reported that Bay County is expected to experience a 19% population decline between 2020 and 2045, with a 27% reduction in the active population during the same period. Click here to learn more about the population forecast for Bay County.

Bay County is moving forward to address these concerns through a strategic partnership with Bay Future to implement three different economic development proposals, Barcia said. Through its ARPA funding pool, the Bay County Board of Commissioners awarded Bay Future $2 million for the project. The project will include small business grants, a small business support program in coordination with SVSU’s Small Business Development Center, and a talent attraction and retention initiative.

“The intention is to turn the prediction of population loss into growth,” Barcia said.

According to Barcia, Bay County also allocated $300,000 to Boys and Girls Clubs in Essexville and Pinconning for after-school care, $150,000 for initial broadband needs assessment work and $750,000 in funding to support local nonprofits through a partnership with the Bay Area Community Foundation. .

The Bay City Commission had split into subcommittees at the end of 2021 to discuss how to use its ARPA funding pool of more than $31 million. So far, the commission has approved allocations for various programs and projects throughout the city.

“I must commend the City Commission for taking the time to strategically plan, collaborate to maximize our resources, and engage our public through civic engagement to transform our community,” Muscott said.

Recently, the commission approved an allocation of $5,996,572 to fund 15 different road repair projects across the city on its Monday, February 7. The city also created a $1 million program where approved applicants receive a one-time grant of up to $3,000 per household to pay for overdue utilities and rent or mortgage payments. About $2 million has been allocated to create a three-pronged home repair program for residents as well.

In addition, the city also recently launched a $300,000 Small Business Relief Program using ARPA funds and over $700,000 in funding has been earmarked for immediate community needs.

“Our challenges are great, the road is long and there is so much work to do,” Muscott said. “But, Bay City, we are ready.”

A year of festivals, vaccines and scooters; look back on 2021 in Bay City

Find out how the new redistricting maps could impact Bay County

‘Let’s get the money out,’ commissioner says as Bay City nears vote on ARPA proposals

‘We are strong in Bay City,’ says city manager during 2021 State of the Community Address

We elected the most diverse city council in history. Now what?