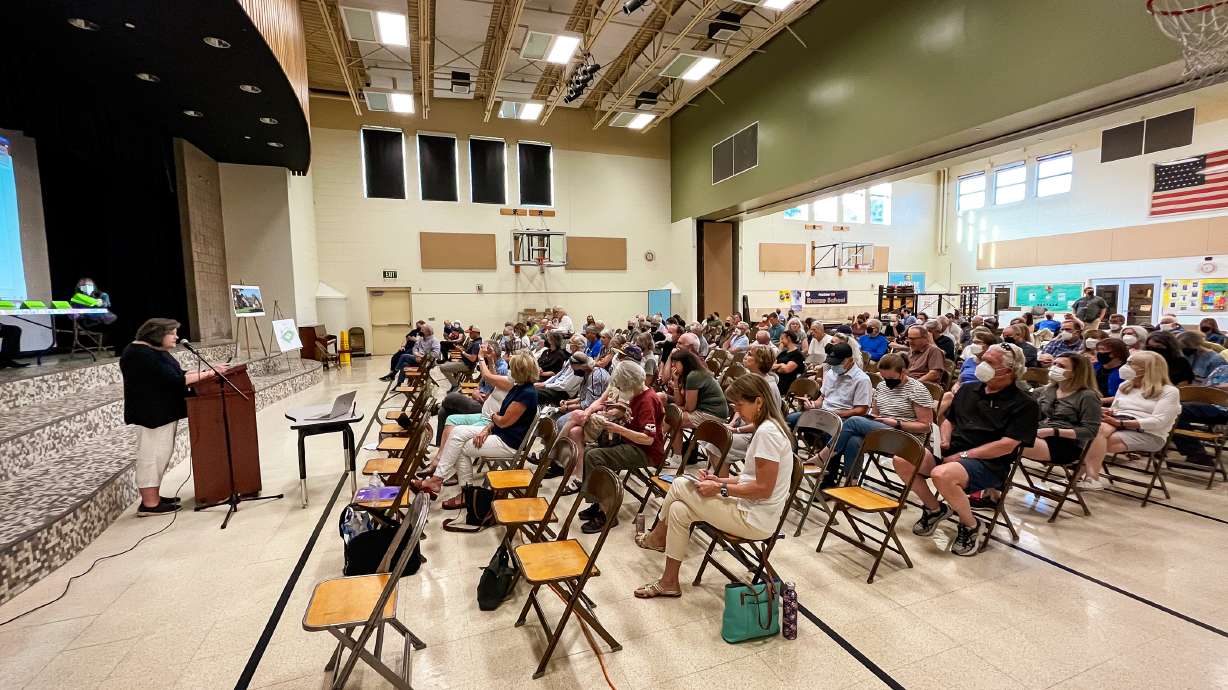 SALT LAKE CITY – Yalecrest, on the east side of Salt Lake City, is a quiet, folksy neighborhood essentially nestled in the scenic foothills that rise above.

The neighborhood’s winding streets are dotted with English Tudor and English Cottage single-family homes and pleasant scenery. It’s a slice of the American Dream that has remained untouched for so long that it’s listed on the National Register of Historic Places.

It’s also at the center of a new city affordable housing plan that could upend much of the neighborhood through rezoning.

That possibility is why more than 100 residents crowded the gymnasium at Bonneville Elementary School on Thursday to voice their opinions on the matter; the majority of people who showed up seemed to be against the plan.

“It’s an issue that affects a lot of people,” said Janet Hemming, president of the Yalecrest Neighborhood Council. “At the end of the day, there’s a right way and a wrong way to create affordable housing and that’s the wrong way, in our view.”

Affordable housing is certainly something that has been on the minds of leaders in Salt Lake City and Utah over the past few years. The median sale price of all homes in Salt Lake City rose from $259,000 in 2015 to $481,750 in September 2021, an increase of 86%.

Nigel Swaby, a Salt Lake real estate expert and member of the Fairpark Community Council, said there were many reasons why Salt Lake City — and Utah in general — found itself in this predicament. While he hears all the time that California, investors, corporations and rental housing tech companies are driving the price hike, he says Utah’s high birth rates, zoning laws and community opposition also play a role.

Another problem is the lack of condominiums. That, he said, came after the Great Recession led to thousands of condo foreclosures, likely prompting developers to focus primarily on new apartments over the past decade. The COVID-19 pandemic has only added fuel to the affordability fire.

Whatever the cause, soaring housing prices prompted Salt Lake City Mayor Erin Mendenhall to focus on the issue during her State of the City Address earlier this year. The city then needed about 18,000 affordable housing units. The mayor said the massive shortage is why the city needs to come up with “creative” solutions to the problem.

The Salt Lake City Planning Commission then unveiled the draft proposal for a new affordable housing incentives plan last month. It highlights Yalecrest and the neighborhoods surrounding it as one of the main areas for single-family and two-family plots, which would be rezoned into larger properties that would essentially double the area’s population.

The plan could result in three or four family houses with a maximum height of three floors. Since the neighborhood is close to a few public transit options, areas closest to 15-minute buses are more likely to be adjusted. There are also restrictions on 30-year deeds aimed at keeping all new construction affordable.

“It’s not massive density,” Swaby said, stifling questions from residents that the neighborhood might end up like places closer to downtown.

However, several residents have still expressed concerns about what this means for their homes and even for the history of the neighborhood listed on the Historic Register in 2007. This listing does not guarantee that some historic homes will survive the new code, Lynn said. Pershing, the founder of an organization called KEEP Yalecrest.

She said it is possible to add historic protections to the neighborhood, but this must be approved by the majority of residents in the neighborhood and then by city leaders. Meanwhile, local attorney and Yalecrest resident Brian Burnett said he was unsure how the city would be able to enforce restrictions on deeds that would keep housing affordable.

Hemming added that the city should also start to consider the water shortage, as it also plans to add more housing, given the extreme drought the city still faces and the uncertainties of change. climatic.

None of the expert guest speakers were involved with the plan itself or the planners. A Salt Lake City spokesperson said the city’s planning director attended the event to listen to public comment, though city leaders say they weren’t invited to to participate.

Not everyone at Thursday’s meeting was against the plan either. Atticus Edwards, a 25-year-old man who said he has lived in the neighborhood his entire life, spoke of Salt Lake City’s darker history of covenants banning minorities from living in single-family homes in the area. Utah is still in the process of removing racist language from old property records across the state.

He caused a stir at the meeting by asking what neighborhood residents are willing to do now to help affordable housing given this history.

Community leaders in Yalecrest say they appreciate efforts to tackle soaring house prices, but they don’t believe the plan they’ve seen so far is the answer. Their concerns are not the result of NIMBYism, argues Hemming.

“We want to get to ‘yes’. We’re not obstructionists; we’re just trying to be good citizens and point out some of the problems, some of the damage,” she said. “We hope we had a good discussion together. We can improve it and make it better and (have something) that we can all agree on and move forward.”

The Salt Lake City Planning Commission is not expected to receive an update on the affordable housing plan until this fall, according to the city’s website. The Salt Lake City Council must also vote on it before it goes into effect.

If we don’t (speak loudly), it will just pass and people will find out.

Concerns about this process also emerged during the meeting. Burnett said he took the proposal to Mendenhall after an altercation with her shortly after the plan was produced, alleging the mayor mocked her feelings about it.

“She’s going to get this through even if it’s representative government,” he said, as some gasped and groaned in the audience. “Although, in my community council, people were against it too much. I think she really intends to push this through.”

A spokesman for Mendenhall’s office was unable to confirm this run-in, but disagreed with the statement, saying the mayor is “certainly supportive and committed to the process of public consultation on these questions,” in a statement to KSL.com.

As the city continues to gather feedback on the housing plan, Hemming says it is hosting events similar to Thursday’s at nearby community boards in the coming weeks. Its goal is to bring the plan to residents while the city is still in its public consultation process – before it is approved by city leaders.

“If we don’t (talk), it’s just going to pass and people are going to find out,” she said. “We hope there will be a lot of changes. We hope the city listens to its people.”