‘Art is a good teacher’: New public exhibition draws attention to the drying up of the Great Salt Lake 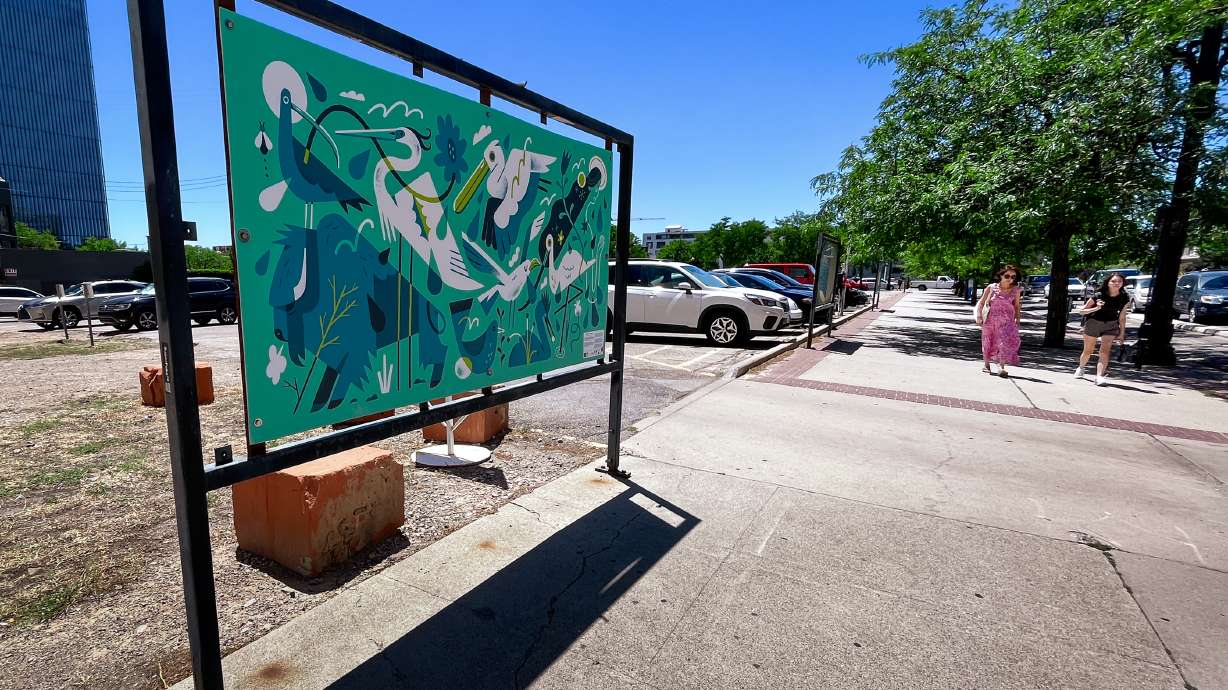 On Tuesday, people march past a painting of the hand celebration: Save Our Great Salt Lake on 300 South in Salt Lake City. The painting is one of more than a dozen that highlight problems with the drying up of the Great Salt Lake, which hit an all-time high this week. (Carter Williams, KSL.com)

Editor’s note: This article is published through the Great Salt Lake Collaborative, a solutions journalism initiative that brings together news, education and media organizations to help inform people about the plight of the Great Salt Lake – and what that can be done to make a difference before it’s too late. Read all of our stories at greatsaltlakenews.org.

SALT LAKE CITY – Jacob Brooks’ latest painting is quite simple, so simple his 3-year-old son can understand the message Brooks is trying to convey.

It’s a California seagull with a sego lily on its chest – Utah’s state bird and flower – sprawled on canvas. The bird is clearly sad, shedding a tear under the message “Save Our Great Salt Lake”. It’s intentionally simple enough that virtually anyone who meets it – even a 3-year-old child – knows something is wrong with the Great Salt Lake because the bird is crying.

“The simplicities I created were honestly aimed at the younger generation,” explained Brooks, an artist who lives in Provo. “It opens up a kind of dialogue about why the seagull is sad, which (leads to) talking about our shrinking Great Salt Lake.”

It is one of more than a dozen Great Salt Lake-themed paintings currently displayed on a four-block stretch of downtown Salt Lake City. They are the latest subject of a rotating public art exhibit created by the arts and culture nonprofit Craft Lake City.

The organization installed the 14 new artworks in downtown Salt Lake City over the 4th of July weekend, all of which highlight the importance, history of the lake or the looming environmental dilemma its drying up would create. The goal is to raise awareness of the importance of the lake, especially for those who don’t think too much about it, says Angela Brown, executive director of arts and culture association Craft Lake City.

“I think many of us who have lived in Salt Lake for several years often forget that we are so close to such a beautiful, unique body of water,” she said. “It really is a very, very unique body of inland saltwater – there aren’t many in the world.”

Art with a cause

All of the artwork in the collection is part of Craft Lake City’s Celebration of the Hand series, which began a few years ago to provide those traversing 300 South with an uplifting experience. This exhibit rotates the art every few months or so with different themes and ideas. All artwork is created by local artists.

As Brown pondered what this summer’s theme should be, it all seemed to come back to the city’s namesake: the Great Salt Lake.

Part of it has to do with how the Great Salt Lake has become Utah’s symbol of drought and water conservation. It hit an all-time low for the second time in two years and is expected to continue falling even lower in the coming months, US Geological Survey officials reported on Tuesday. Experts attribute the lake’s decline to the current western drought and ongoing mega-drought, as well as projects that have diverted water from its tributaries.

Its decline is alarming as more and more of the toxic dust – containing arsenic, cadmium, copper, mercury and selenium – normally contained under the lake is exposed with every inch of fall, threatening to blow into the communities.

It’s also a concern for the lake’s ecosystem, which attracts 10 million migrating birds each year. The lake’s brine shrimp are also important for feeding fish and shrimp sold around the world, according to the Utah Division of Forests, Fires and State Lands.

I think we forget all the good that the lake offers. … (The collection offers) a chance to reflect on our own relationship with the lake and to appreciate the lake for what it gives us and the ecosystem it provides so that we can live here.

It seemed logical to present the large body of water.

“I think we’re overlooking all the good the lake offers,” Brown said. “(The collection offers) a chance to reflect on our own relationship with the lake and to appreciate the lake for what it gives us and the ecosystem it provides so that we can live here.”

Craft Lake City, Save Our Great Salt Lake and CRUDE have teamed up, calling on Utah artists to help out earlier this year.

The call attracted people like Brooks. The Provo artist explained that the Great Salt Lake means a lot to him and his family, who often recreate there. That’s why he jumped at the chance to participate in the project.

“It’s just something I love,” he said. “I love animals, I love their beauty. It’s idyllic, it’s something that obviously affects our health by exercising on it. It’s really part of our lives.”

Visualization of the work

All recently installed artwork can be found on 300 South. Craft Lake City coordinates its public art program with the Temporary Museum of Permanent Change, which has set up the large metal booths on the street where the art is displayed. While these range from 200 West to 200 East, most of them are in and around the Rose Wagner Performing Arts Center, 138 W. 300 South.

These pieces showcase the different components of the lake, such as the wildlife that Brooks alludes to with his painting. “Safe Passage” by Courtney Leigh Johnson introduces the other birds that depend on the lake’s ecosystem, such as pelicans, shorebirds and raptors.

Other designs show humans and wildlife experiencing the impacts of the dry lake, or what the lake is turning to from what it has been historically.

Analia Evans’ piece, for example, captures the bison that inhabit Antelope Island, though it’s really not an island anymore because of the shrinking lake. Lake level changes pose problems for the animals that live on Antelope Island – and the other islands in the lake.

“The bison herd that resides on the island are now free to roam and could very easily roam your front yard. They rely on the safety of Antelope Island, and without that they risk further damage. by humans,” Evans wrote, when the project was first announced in May.

The artwork will remain on public display until September 1, when the theme will change again. Craft Lake City and Save Our Great Salt Lake are also hosting a free online event on July 13, where sponsors and artists will discuss their works.

Those involved hope the temporary art project can provide an open discussion about the Great Salt Lake, especially for those who cross it on the street. Brooks believes his works convey sadness, but the other pieces evoke a “full spectrum” of emotions, which address the subject in a way that only art can.

“There’s…a beauty that you can’t really convey unless it’s through art,” he said. “You can talk to our lawmakers about it and figure that out, but we’re really visual learners, I guess. Art is a good teacher for that.”

The most recent stories on the Great Salt Lake