JEBEL MUSA, Egypt – An initiative to mobilize religious leaders around the world to push governments to do more against climate change was launched on Sunday morning with an Israeli environmental activist smashing fake stone tablets atop a peak Egyptian considered by many to be Mount Sinai, to symbolize the world’s failure to protect the planet.

The idea was born in the run-up to the UN climate conference COP27 taking place in the Egyptian resort town of Sharm el-Sheikh, by solar energy entrepreneur Yosef Abramowitz and David Miron Wapner, who chairs the Interfaith Center for Sustainable Development based in Jerusalem.

After sunrise, Abramowitz and Wapner gathered at the summit with Nigel Savage, the founder and former director of the American Jewish environmental organization Hazon, and his successor Jakir Manela, to read sections of the Holy Land Declaration on the climate change signed in 2011 by the multi-denominational Council of Religious Leaders of the Holy Land. Two teenagers from the United States, part of Christian Climate Observers, also joined the ceremony.

After the group read a new draft list of “Ten Principles for Climate Repentance,” formulated by dozens of multi-faith leaders gathered in London over the past few days, Abramowitz smashed two tablets on the floor.

The act was a symbolic echo of the Bible’s Moses breaking the 10 commandments in protest against the Israelites, after descending Mount Sinai.

“We look at Sharm el-Sheikh and we are not satisfied,” Abramowitz said, breaking a tablet.

One of the tablets was made by young people from the Israeli branch of Strike 4 Future, painted with the words “Broken Promises” in Hebrew. The other tablet was painted green, to symbolize the “green commandments,” Abramowitz said.

“Political leaders around the world have failed to speak out on climate so far,” he said. “This is the 27th gathering of world leaders, and things are only getting worse. We are calling on faith leaders to heighten the sense of urgency and bring them to bear, hopefully forcefully and globally, to push for at least a 50% reduction in global warming emissions from by 2030. Reducing emissions so gradually is immoral at this point.”

James Sternlicht, head of the peace department, called on faith leaders to make a climate vow: “I, as a person of hope, commit to making the world a better place for people and the planet, every day that I shall live.”

“Today, as religions put aside their differences in a common call for climate action, we work for a new alliance for humanity in the name of protecting our common home and improving our common human future,” he said via video. link of the confab COP27. 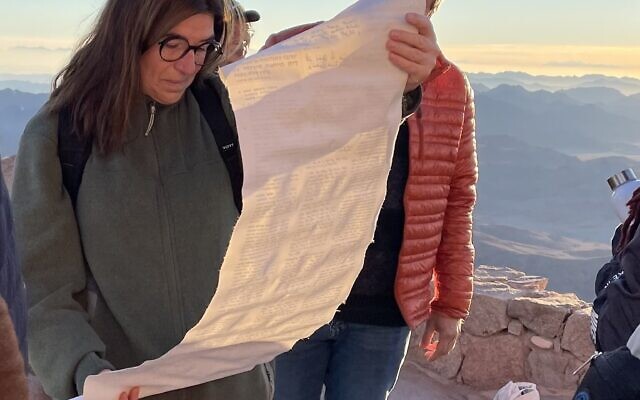 Celine Phillips, a member of the French delegation to the UN COP27 climate negotiations in Sharm el-Sheikh, Egypt, reviews the Holy Land declaration on the summit in Jebel Musa, Egypt, November 13, 2022. (Sue Surkes/Times of Israel)

One of the immediate signatories of the climate pledge was Flora Vano, a member of the delegation to the COP27 conference from the tiny Republic of Vanuatu, an archipelago of 83 islands made up largely of coral reef atolls in the South Pacific.

The United Nations ranks seismically active Vanuatu as the country most at risk in the world when it comes to natural disasters, and these, according to Vano, are intensifying due to climate change. These include sea level rise, cyclones, strong storm surges, food losses from both heavy flooding and drought, and migration.

“I am a woman and a mother and part of humanity,” she said. “I have the right to survive.” 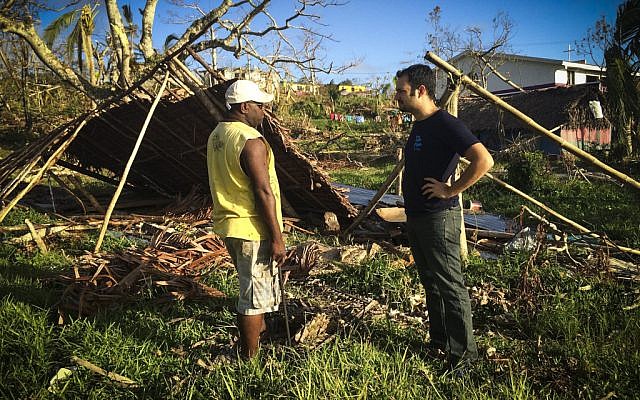 An IsraAid worker talks to a local man after Cyclone Pam hit the Pacific island nation of Vanuatu in March 2015. (IsraAID/File)

Abramowitz and Wapner’s original idea was to bring dozens of multi-faith leaders to Mount Sinai for the inaugural ceremony, but Egyptian authorities refused permission, saying the time was not right.

The town of Sainte Catherine, below the imposing mountain, is currently a vast building site. The state is building new hotels and a huge multi-denominational prayer center. The mountain is the most popular of several sites in Egypt, Israel and elsewhere that are traditionally associated with the biblical location of Mount Sinai, where Moses ascended to receive the Ten Commandments from God in the Old Testament. 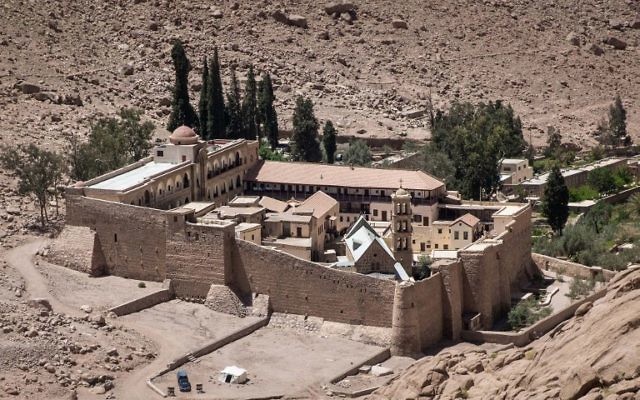 Instead, the new Sinai Climate Partnership will be officially announced on Sunday evening at a ceremony on Parliament Hill, the highest point in London.
Ceremonies are also planned for highlights in Jerusalem, Salt Lake City, Ecuador, Australia, India’s Mount Abu in Rajasthan and Calcutta, and Mount St. Francis, a Catholic retreat center in Indiana.

Savage noted that Israel would soon mark 75 years since its founding, which he described as an inflection point for the nation: “This 75th anniversary, at this particular time, considering all that is happening in the world , and with the arrival of a new government in Israel, is a truly key moment and an opportunity for the State of Israel and the Jewish people to say that the next 25 years will be about responding to the climate crisis.

I joined The Times of Israel after many years covering US and Israeli politics for Hebrew language news outlets.

I believe that responsible coverage of Israeli politicians means presenting a 360-degree view of their words and deeds – not only conveying what is happening, but also what it means in the broader context of Israeli society and the region.

It’s hard to do because you can rarely take politicians at face value – you have to go the extra mile to present full context and try to overcome your own biases.

I’m proud of our work that tells the story of Israeli politics straight and complete. I believe that Israel is stronger and more democratic when professional journalists do this difficult job well.

Your support for our work by joining The Times of Israel community helps ensure that we can continue to do so.

You are a dedicated reader

We’re really glad you read X Articles from The Times of Israel over the past month.

That’s why we started The Times of Israel ten years ago – to provide discerning readers like you with must-read coverage of Israel and the Jewish world.

So now we have a request. Unlike other media, we don’t have a paywall in place. But since the journalism we do is expensive, we invite readers to whom The Times of Israel has become important to support our work by joining The Times of Israel community.

For just $6 a month, you can help support our quality journalism while benefiting from The Times of Israel WITHOUT ADVERTISINGas well as access Exclusive Content only available to members of the Times of Israel community.

Thanks,
David Horovitz, founding editor of The Times of Israel 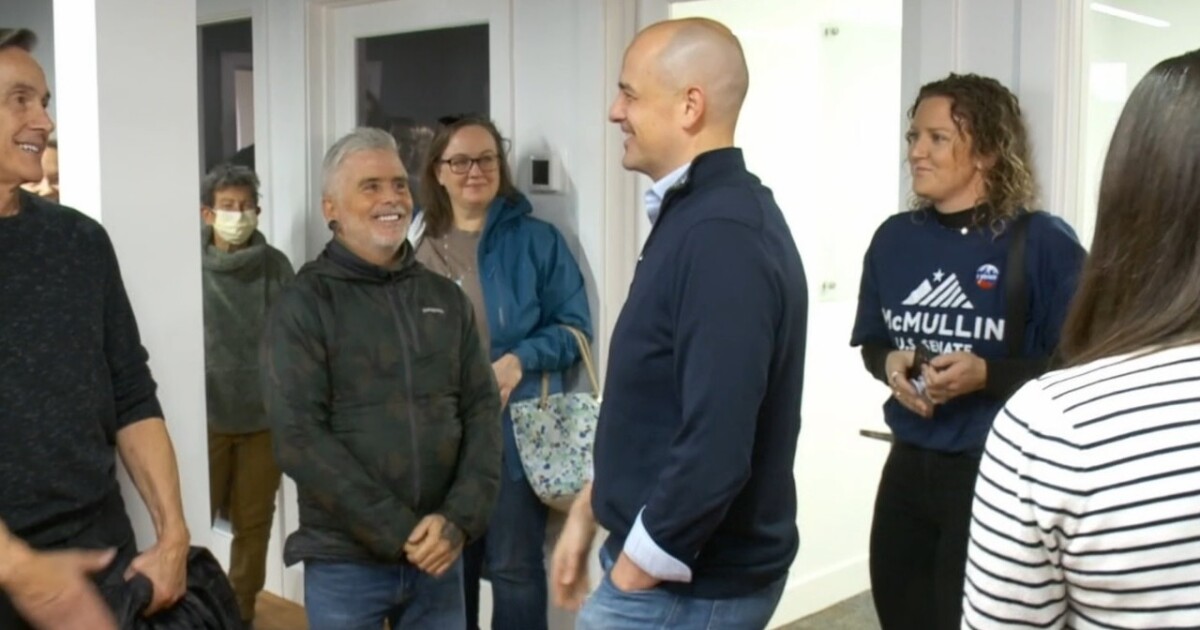