A long-standing office tower in Utah will be transformed into apartments. Will it become a trend? 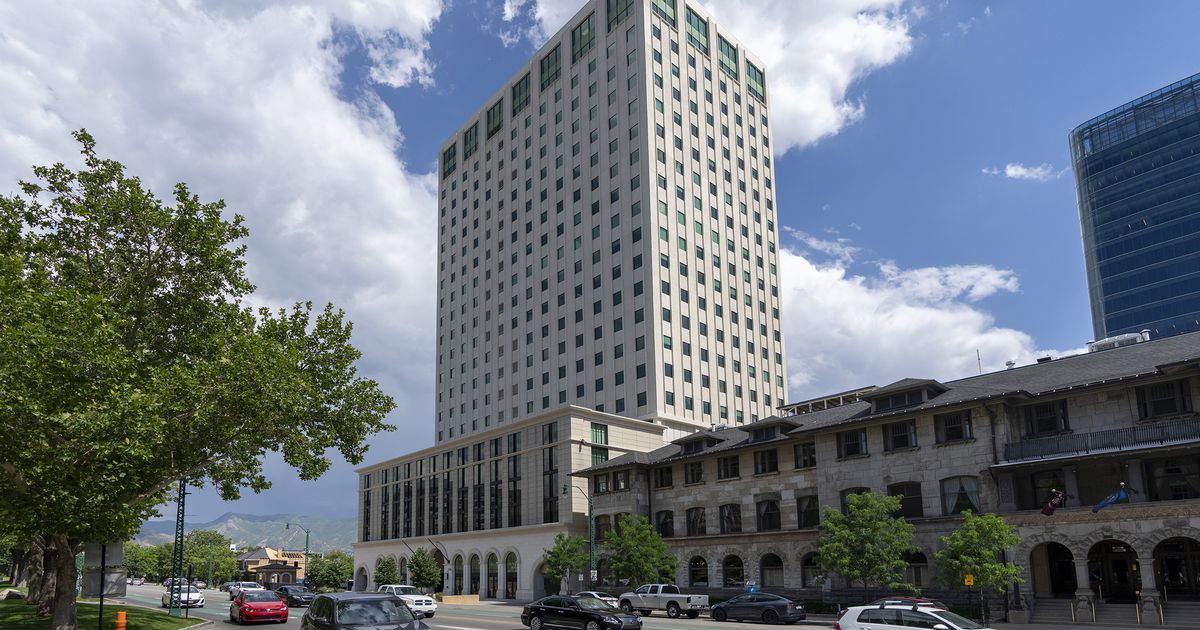 The famous 24-story building will have 255 high-end rentals.

As the residential building boom in downtown Salt Lake City continues, developers have purchased a high-profile office tower along South Temple with plans to convert it into luxury apartments.

Hines, a Houston-based global real estate firm, said work on the 24-story white office building known to longtime residents as the University Club Tower at 136 E. South Temple will begin in early 2023 and transform it into 255 high-end studio, one- and two-bedroom units.

Crews will strip the rectangular office building “down to its core,” Hines said, and repurpose it “for high-quality residential living at a time when the Salt Lake City market is starving for much-needed housing.”

The private company said its recent purchase of the 216,976-square-foot skyscraper — for an undisclosed price — came after extensive analysis showed it met walkability and natural light requirements, and that the shape and general floor plan of the building were conducive to the creation of so many apartments.

Taking an adaptive reuse approach as opposed to new construction, the company said, will reduce carbon emissions by limiting the use of new construction materials, especially concrete, an industry staple that also produces large amounts of carbon dioxide to manufacture. Updating the building’s mechanical systems, Hines added, should also reduce emissions throughout its life cycle.

The announcement comes as several new office towers have opened or are under construction downtown, even as office space across the country sees some of its highest vacancy rates in three decades, depressed by the effects of the pandemic and work from home trends.

At the same time, demand for homes – to rent or to buy, at all price points – has reached new highs, although some signs may start to fade as interest rates rise.

Salt Lake City’s trend toward luxury housing, meanwhile, has fueled frustration among those who point to the region’s dire need for more affordable housing as housing prices and rents continue to climb.

Referring to the city’s “tremendous growth” over the past decade and an insufficient supply of housing, Dusty Harris, Hines’ senior managing director, said the company “is stepping in to fill a need among townspeople”.

“We find a creative solution for a building, which is not well used, by converting it to a use that the community needs,” Harris said in an interview. “We’re excited about that, and we think there’s probably a lot more to come. A lot of people in the real estate industry are thinking about that.

And while it won’t directly produce moderately priced housing, he said, “our view is that the city needs housing of all types and that certainly helps meet the demand for more housing in the community. And simply increasing the housing stock should help make the market more affordable.

The South Temple Tower will be a prime residential location, Harris said, for its proximity to downtown amenities, landmarks and public transportation as well as its views of the Salt Lake Valley.

Located just east of the Alta Club, near the intersection of State Street and South Temple, Hines’ latest Utah acquisition was renamed South Temple Tower in 2015 after a $10 million redesign by a former owner, Maier Siebel Baber, based in San Francisco.

This renovation restored some of the tower’s original historic character, improved its exterior, created a two-story entrance hall and entrance plaza on the south temple, and improved views from some of its upper floors.

Rise of high-end and high-rise housing

(Image courtesy of Hines, via Salt Lake City) An interpretation of the 31-story apartment tower and adjacent park that will be built where the Utah Theater once stood on Salt Lake City’s Main Street .

Hines is also finalizing the design of a 31-story luxury residential tower called 150 South Main Street Apartments, located on the site of the now-demolished Utah Theater on Main Street, with 400 apartments, 40 of which are subsidized rent. .

The two residential towers proposed by the international developer join several similar projects launched in recent years amid an apartment building boom and what is expected to be growing demand for luxury housing in Utah’s capital, especially among higher paid workers moving to the urban core.

The 21-story Liberty Sky at 151 S. State opened this year. Built by Utah-based Cowboy Partners with 272 luxury units, it marks the city’s first rental project above the 200-foot mark.

In what will soon be Salt Lake City’s tallest skyscraper, teams from Boston-based Kensington Investment opened the Astra Tower at 200 S. State St. in January, which will stand 450 feet and 40 stories high once completed in fall 2024, with approximately 372 luxury apartments.

(Courtesy of Kensington Investment Co., via Jacobsen Construction) A rendering of the future Salt Lake City skyline with the addition of the Astra Tower, which will become the tallest skyscraper in Utah .

A recent study identified a record 3,974 new apartments under construction downtown and predicted that their rents would likely be at least 30% higher than elsewhere in Salt Lake County.

The researchers also pegged prevailing apartment vacancy rates in Salt Lake County at an all-time high of 2% or less, pushing average rents up 10.1% in 2021 alone.

U-Talk: What does Independence Day mean to you? | News, Sports, Jobs